Dog sledding has always been something I’ve wanted to do. I used a visit from my mom and niece, Caroline, as an excuse to fulfill this dream. 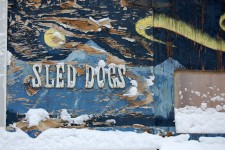 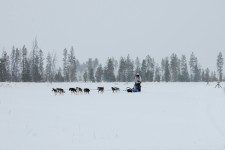 Scheduled way ahead of time, our trip was the morning after a huge storm with a winter weather advisory still in effect.

A native Texan, my mom’s never seen more than a couple inches of snow at a time. This was as good a time as any to set her an inch off of the white stuff and let her slide around at 25 mph. 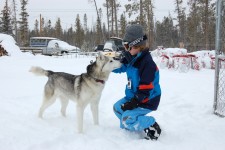 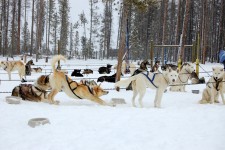 All bundled up, we were weighed and placed in our sleds while the mushers chose the dogs that would lead us and attached them to harnesses. There are 85 dogs here, though some are still puppies and don’t pull yet, and some are retired (and available for adoption). Based on personality, intelligence and fitness, the dogs can run sleds between 1 and 3 times a day.  So, 60 or so dogs tied up waiting to run, and barking incessantly. 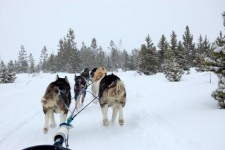 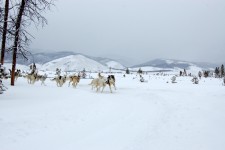 Once bridled and commanded, the dogs took off into a snowy meadow with a instant jerk to the sled. Within seconds, it was near silence. Just the quiet sounds of dog footsteps on thick powdery snow. The ride was about 45 minutes through clearings and forest. The scenery was beautiful, but the smell was pretty strong. Every time we stopped the dogs peed, and every time we went, the dogs pooped on the run.

Afterwards, we were able to pet the dogs who pulled us. Bode and my mom knew the name and backstory of every one of their dogs. This included a blind dog whose brother was his guide, and a dog that had run the Iditarod in Alaska. The dogs were amazing, and there was definitely a wildness to them that most indoor pet dogs don’t show. These dogs really seemed to love to run and roll around in the snow, even on one of the coldest days we’ve had.

Now, Bode wants a team. I’m just not sure we can fit them in the bus – maybe we could just tie them up front to pull? 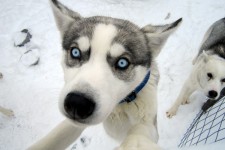 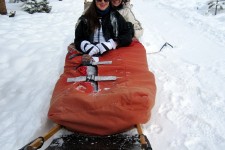 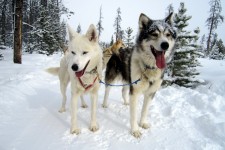 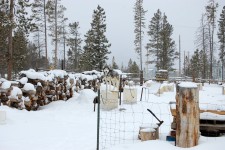 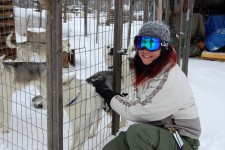 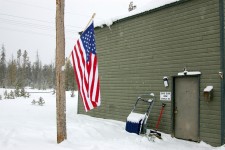