It’s been a while since we’ve had a Christmas tree. Living on the road and owning the absolute minimum of stuff doesn’t really lend itself to celebrating a big ‘traditional’ holiday.

This year, we’ve got an actual place and it came complete with a lighted Christmas tree. One of those that you just pull out of the box and the spring-loaded branches pop out with pre-wired lights. It took 20 seconds to set up. I now see the allure of these things.

It even came with ornaments – our landlord’s family Christmas ornaments. Photos of their family dog, their kid’s school projects, their vacation souvenirs, etc. These went right back into the box. So, we were on our own. There was no way were were going to buy anything – especially since we’ll be back in the bus in April.

A pile of ornaments aren’t coming with us, so everything will likely go right into the trash or fireplace when the tree comes down.  It was time to get creative.

Everything we were about to recycle or throw away became a source of potential inspiration. For the past few weeks, when inspiration struck (usually in the form of a toilet paper roll), we’d cut and glue and glitter. 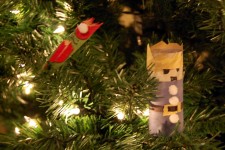 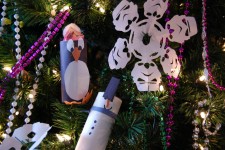 Toilet Paper Penguins showed up. A Stormtrooper Snowflake made an appearance. Popsicle stick elves? Why not. 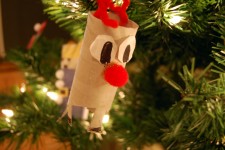 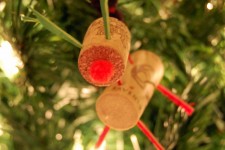 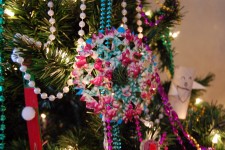 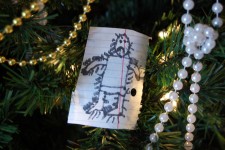 A snowflake that’s actually a molecular model of a virus can be surprisingly decorative. So can an abominable snowman.

If you look at him in just the right way, that guy on the Pringles can has a major resemblance to a nutcracker. And, his mini-toiler paper roll nephew.

And, toilet paper roll owls. Lot’s of them. 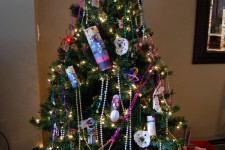 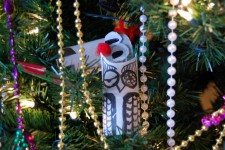 Through this family bonding experience I learned two things. 1) We use A LOT of toilet paper and 2) I am a terrible artist, but my work is a great source of laughter to the boys.