We were still weak and sick and looking forward to getting off the boat. It was another rainy morning. There were several stops of 20 minutes or less – some of them being in the middle of the river with another boat tying up to ours and getting some bags from the hold.

Manaus came into view and everyone went to the rail to see, but it was still hours before we arrived. About 10 km before Manaus, we saw the Encontro das Aguas which is really unusual. It is the meeting point of 2 rivers, one ‘brown’ the other ‘black’. Because of the different temperatures, density and speed of the currents, the two rivers don’t mix and run side by side for nearly 6 kilometers. 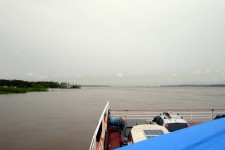 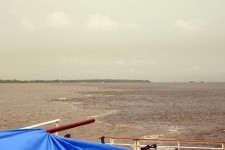 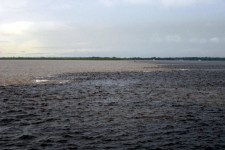 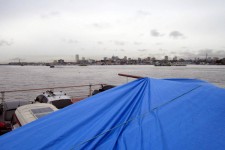 We finally arrived in Manaus, about 4 hours behind schedule. Unfortunately, the now-orange tomatoes were unloaded first, so we had to wait. We were kicked out of our room, and it was raining, so we sat in the bus. Bode and I finally went to find some food at the port and Jason joined us when it looked like it would be another few hours.

After 3 hours, Bode and I took off to find our hotel and left Jason with the bus. We got lost in Manaus, but eventually found it. Jason finally met us around 9 pm – 8 hours and one questionable payment to a port security guard later. 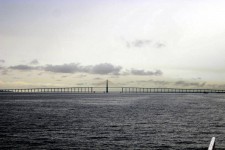 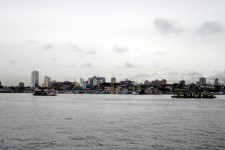 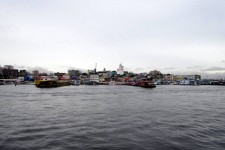 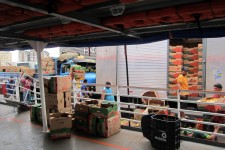 Finally, a shower and a non-moving bed.

*A couple of good things to mention if you plan on taking this journey- The mosquitoes were nearly non-existent.  I think it had to due with the time of year (the river was high) and the moving boat, but we never put on bug spray. I did notice some when we were at port in Santarem though.

The heat was only bad in the day, and there was always a breeze while we were moving. At night, it was downright pleasant, most folks on hammocks had a light blanket.

Finally, if going from Manaus to Belem, the trip is only three days.