We asked Bode what he wanted for his birthday, and he said he wanted to play video games all day. Maybe some air conditioning, a pool and a big TV. And, a giant water gun.

You only turn eight once, so we obliged.

We got a good deal online at a nice modern hotel in Natal. It’s been a while since we’ve had these types of amenities, so we decided to live it up for a couple days. We were in the pool within 10 minutes and playing video games within the hour. By hour 2, we had trashed the place.

The toilet wasn’t flushing.  It wasn’t clogged, so I decided to take the lid off and check out the problem. Crash- porcelain lid hits tiled bathroom floor and shatters into a million pieces. Oops!

I picked up what I could and told the front desk that there is a problem with the toilet, and in trying to fix it, the lid broke. A maintenance guy was dispatched, I showed him the problem (the float would get stuck and no water would fill the tank, meaning no flush). He pushed it down, and returned 5 minutes later with a new lid. That was easy.

When we returned to the hotel later there was a note informing me that the broken lid was my responsibility and they would be charging me. Oh, and it was an imported toilet and parts weren’t available, therefore they would be charging me for a whole new (imported) toilet. I stewed on this overnight, and the next day I sent the manager a very nice, complimentary email. I told her that perhaps there was a miscommunication but the toilet was broken BEFORE I broke the lid. In fact, it was still not functioning properly the next day and that I had told the front desk that morning.  Had the toilet been working, I wouldn’t have had to remove the lid. I didn’t mind paying for the lid, but why should I have to replace the hotel’s non functioning toilet? A few hours later, I got a snippy email from her that said that I should have called the front desk when the toilet didn’t work, and she was still going to charge me for the whole shebang. 10 hours later,  no one has come to repair it. I send her another note letting her know.  Still, no one comes.

It is something we can fix ourselves, so when necessary we VERY CAREFULLY remove the lid and adjust the float or add water so it will flush. This isn’t a huge inconvenience to us, since we happy to have a toilet in the first place.

At check out the next day,  I let them know that despite telling the front desk twice, and notifying the manager by email three times, our toilet still doesn’t work. I offered to pay 1/3 of the price of the toilet and they said no.

Let me set this scene: Big fancy lobby, Bode is sitting next to me reading a book. I explain that since the toilet was and is still broken,  I didn’t think it was fair for them to charge me the entire price. The on duty manager told the front desk clerk to call the police and he picked up the phone and starts dialing. Jason meanwhile was off working on the bus…I had no idea where in the city he was, nor how to reach him. I panicked and could only picture me getting hauled off to jail while my son watched. In hindsight, I imagine the police would not have done that, but the police we’ve dealt with in the last 18 countries have not always been the most legit.  In the end, I bought a toilet.

It had been a tough week to have constant wi-fi and cable news- the Boston bombings, explosions in Texas, ricin, Venezuelan politics (which we’re trying to follow). The world is a crazy place – I’m glad we’ve chosen our own version of it to live in.

We moved to a cheaper pousada on the beach with a great balcony to enjoy the beach scene. It is a fun laid back place with beautiful sand dunes in the distance. Bode’s favorite thing about Natal – sushi per kilo – we had it three nights in a row. It was his birthday week, after all. 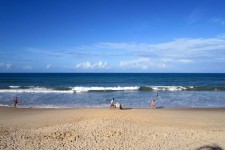 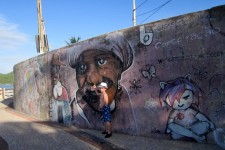 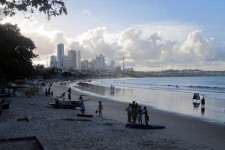 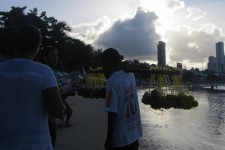 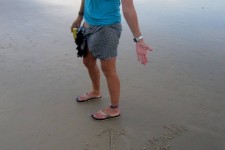 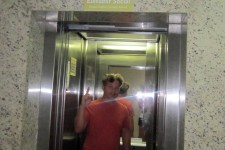 5 thoughts on “You Can’t Take Us Anywhere”