Although it has been a great holiday season–void of malls and panicked shopping, we are still missing our families today.  We asked my Mom to write a guest blog for us today, and she wrote about our early Christmas back in October.

Shameless plug: Just in case you need any last minutes gifts, you can download her award-winning novel, The Secrets On Forest Bend, from Amazon, Barnes & Noble and Soul Mate Publishing.  And, her Christmas novella Redeeming Santa, is available at Amazon, B&N and Smashwords. 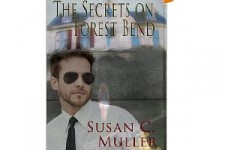 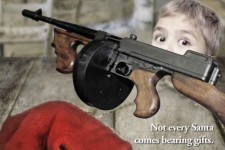 Christmas is where you find it.  This year I found it in October when Team Rehm came home for the holidays. We put up the tree, hung the stockings, and cooked the turkey. Bode e-mailed me his Christmas list. I printed it off and mailed it to Santa with instructions as to when and where.

Bode must have been very good this year. Christmas morning we were awash in Star Wars Legos. He had a big space ship, a smaller space ship, and a helicopter. There were pilots, droids, and the dreaded Clone Commander Rex.

He spent Christmas afternoon assembling his new Legos, then he wanted to play with them. The next three days found me sitting on the hardwood floor playing with him. I, of course, was the bad guy.  He got the new Legos while I had the old, left-over odds and ends that stay at my house.

He had a full air force plus a large catapult, an army, brick fortifications, and various weapons. I had a dune buggy, two men with spears, and a bowlegged guy with a sword who couldn’t stand up on his own. I mentioned that he was better equipped than I was. He gave me a short, stumpy guy to be my general.

First, he declared, we should set up.  This took him quite a while.  Me, not so long, although I did point to his brick wall and mention that my guys had nothing to hide behind.  He gave me a palm tree. Maybe we should have the actual war tomorrow, he said. I agreed and invited his general over for dinner. We sat around a campfire and roasted wieners and marshmallows. His general brought over his son, the Prince. My general bowed and acted impressed.

My two spear guys joined us for dinner, but bowlegged sword guy remained on duty, leaning against a box. Then it was night and our armies should rest for the big battle tomorrow. My guys, except for poor bowlegged sword guy, still acting as sentry, lay down on the floor.

That was when Bode unleashed his SECRET WEAPON. A crocodile. The crocodile slipped past my palm tree and bit bowlegged sword guy.  But not hard. He wasn’t hurt.

The next day we started over and did the same things. Only this time he brought over all his spaceships and my general admired them and said how nice it must be to have an air force. He brought over a motorcycle, but he had to hold his man on it. But, HA HA, bowlegged sword guy fit right on it and rode around.  Bode looked surprised, but was very gracious. He said we could borrow it until time for the battle.

The next day was their last day so we decided to have the battle. There was much swooping around by spaceships and helicopters. My guy’s spears turned into lasers and shot at the aircraft, but they must have had bad aim because nothing happened and my men were knocked over (surprisingly difficult for bowlegged sword guy because he was still leaning against a box) but no one was hurt.

All new Legos were packed into plastic freezer bags and taken to Chile. The old Legos went back into the Don’t Mess with Texas lunchbox and were carried upstairs to wait for next Christmas. But I must insist on some changes next year. For one thing, we’re going to have to play in a room with carpet. After three days on the floor, I could barely stand up.  But more important, next time, I want that crocodile! 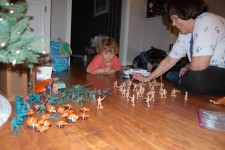 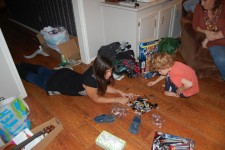 4 thoughts on “Lego My Legos”