This was Bode’s favorite bird. He says if he is reincarnated, he wants to come back as a Hoatzin.

Let’s review why it’s good to be a Hoatzin.  From the Guia de Fauna Selvestre, Selve & Pampas (emphasis mine)…

It is the only member of it’s own family. In the order of cuckoos.

It has a digestive system unique amongst birds. Hoatzins use bacterial fermentation in the front part of the gut to break down the vegetable material they consume, like cattle and other ruminants.

That’s the reason why the Hoatzin itself exudes a disagreeable smell, perhaps for this reason it has few predators and is extremely abundant.

It is also the only species of bird that has chicks with claws on their wings.

This is a noisy species, with a variety of hoarse calls, one of which has been described as like a heavy smoker’s wheezing. 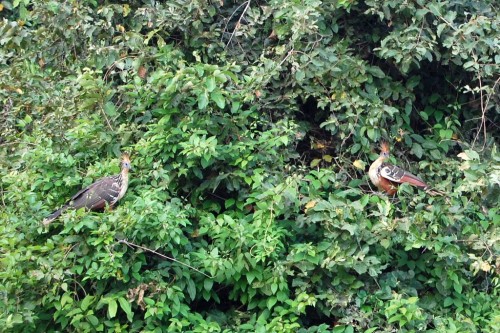