We’ve come to really love Huanchaco, Peru. It’s close to ancient ruins and has tons of surfing, but we haven’t done any of that. There’s just too much relaxing in the sunshine to be had and perfect weather to be enjoyed.

Our place has a pool and we have a 5 year old – enough said. In the last week, Bode has gone from floaties to diving in and swimming across the pool by himself.  It has been great. 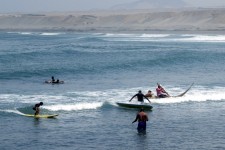 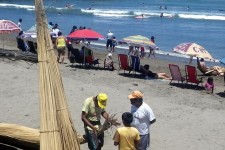 Since we’ve been here, we’ve met several other overlanders – some in monstrously large RV’s – the biggest we’ve seen since Mexico. We’ve also learned that the French educational system is set up to easily accommodate families that are traveling–for free. What a concept. Hence, several French families have come and gone.

Typically, the Europeans ship their vehicles to Buenos Aires, loop around Ushuia, then continue their way north. 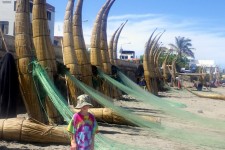 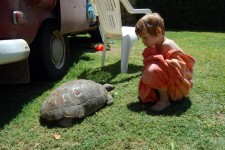 There were some Swiss drivers, too. Everyone is heading north. We seem to be the only ones going south. 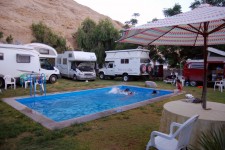 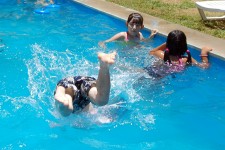 We’ve managed to have a few work days while we’ve been here as well. Jason put on new front shocks and fixed the horn. Hard to believe the horn went out somewhere in Central America and we never fixed it. It was way down on the list, but VERY important when driving in Latin America. The new claxon sounds just a little bit different than the old one.

While we were at it, we pulled everything out of the van and cleaned house – including all the food. Two things learned from this exercise:

-Jason had better play that guitar from Mexico more often

-Someone is going to eat those Trader Joe’s canned beans! 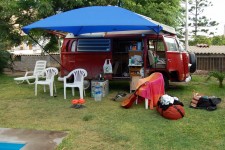 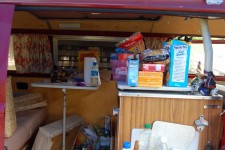 “I’ve been wingin’ zingers all day”-