It was finally time to leave the Galapagos behind and get back to Red Beard. The van had been at the mechanic’s for nearly 2 weeks, and when we arrived she still wasn’t quite ready.  All the original work was done, but Diego was still tweaking things and decided to rebuild the carbs too. After waiting around his place with all our luggage for about 3 hours, we decided to get a hotel room. The next day, Diego (our mechanic) delivered the bus right to us.

We were a couple days behind our intended route due to 1) Dina’s midnight flight was actually on Wednesday, not Thursday as we all were planning and 2) the car needed another day at the mechanic. So, we took off from Conocoto (south of Quito) and headed for the Quilotoa Loop. 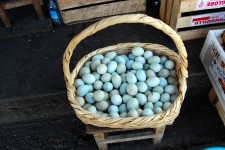 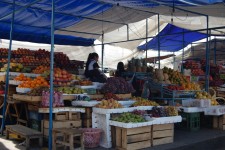 First stop was the market in Latacunga. We picked up some fruit and vegetables, and Dina got to see the craziness of a South  American market day. Then, the climb began. We were headed up to a crater lake in the town on Quilotoa. Maybe not the best thing for a “new” engine, but we climbed higher and higher, all very very slowly. 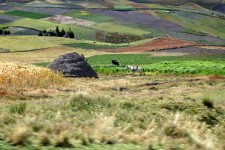 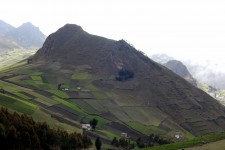 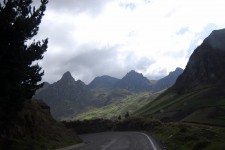 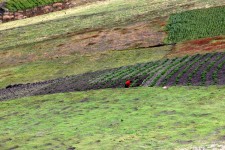 The scenery was unreal. Mountain pasture land with women in their bright, traditional clothing herding sheep or harvesting their crops.  In fields and fields of green, you could see a spot of bright red, and then as you passed realized it was the shawl of a indigenous woman. Our plan was to get somewhere they don’t speak Spanish, and we were right on track. Locals here speak Quiché. 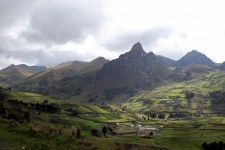 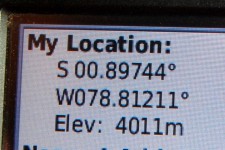 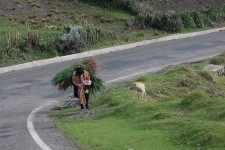 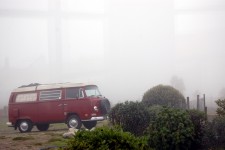 At 4,000 meters we guessed that we were higher than we’d ever driven before. The celebration was a little mellow, however as there was a worry about the car.

It began to get colder, and a fog set in that was like the proverbial pea soup.

After three hours of climbing and we hit the dirt road that would take us to the lake. We were still about 30 km to the town we were intending to make when the van just wouldn’t go ‘no mo.

Luckily, and I truly mean luckily as we were in the middle of nowhere, we happened to be right outside a mountain lodge. I went in and got us a room that included dinner and breakfast. The lodge was great, with a big fireplace and lots of space.  The problem was, they didn’t light the fireplace and it was freezing. We slept under 50 lbs of blankets, and some of us had a little altitude sickness.

The next day Jason checked out the engine and tried a full tuneup – with not much change. He was obviously a bit worried, so we decided to skip the crater and start heading back towards Quito. The plan was to make it back to Latacunga, which is on the Pan-American and send Dina north to Quito on a bus while we turned South. We drove about 20 minutes until we got to a steep climb. The bus simply didn’t have any power to get up it. We pulled over and Jason checked everything again, including the compression –  it was 60 psi. That isn’t good.

As any hero from the first world might, Dina pulled out her iPhone. Yep, she had reception. So, at a cost I am afraid to ask about, we phoned our friend Christian. He phoned Diego and he would send a ‘crane’ to get us. They said it would be there in 3 hours. And so, we waited. 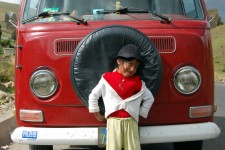 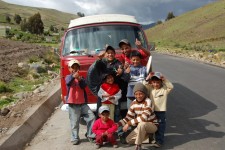 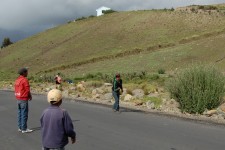 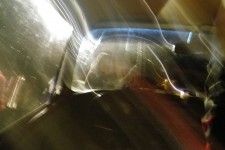 About this time, a group of kids had gathered the courage to come by and see what this big red car was. The puebla we were near had nothing, so we were the entertainment for the day. There were no cars, there was one house open that sold water and cookies. No one had a phone.

The kids came over and checked out the car and talked. Time passed. We pulled out the Frisbee (actually Jason’s from when he was 8 years old) and played for a long time. They loved it.

This, of course, is the silver lining. Even though we are stuck, we are privy to cultures and experiences we might not otherwise be exposed to. We wouldn’t get to meet these curious kids had we just driven by.

The small towns on this loop are not well connected by public transportation, so getting Dina to Quito for a 12:30am flight was starting to become a concern. Still, in some inexplicable lack of attention, we missed the one bus of the day that would’ve taken Dina to Latacunga – it drove right by.

The main form of transportation here is a pickup truck with sides on the back that people stand on. One stopped by to load up with concrete and offered to take Dina to Latacunga for $30. We declined, as the bus was only $1.80.

We decided that as long as the ‘crane’ was coming soon that she still had time to ride back with us to Quito and make her flight. But, the crane hadn’t come.

About this time, the kids started asking uncomfortable questions. Mostly about how much our things cost, and if they could have them. They wanted the frisbee. A hat. Bode’s toys. Sunglasses. It came to the point that if they could see it, they would ask to have it.

We had given them some crackers, but you don’t really want to start giving gifts away when you are broken down. No telling how many more people will start showing up.

We pulled out Dina’s lifeline iPhone again and made another call to see where the tow truck was. It should be there very soon. We waited another hour.

A Japanese-made car covered in Japanese bumper stickers stopped to see if they could help. I mention this only because we hadn’t seen anything like it before. We’ve learned from this trip that a passion for cars requires some disposable income that not everyone in this area would have. Jason talked with them for a bit, then told Dina that for $4 they would drive her to Latacunga, 2 hours away. There, she’d have to catch a bus to Quito and then a cab to the airport.

So, within seconds we hugged goodbye and sent our non-Spanish speaking, dear friend Dina on her way with complete strangers.

Good thing too, it was 6 hours before the ‘crane’ arrived to take us back. We arrived in Conocoto at 1am.

5 thoughts on “Red Beard Rides Again, For A Day -or- The Airport Story that Trumps Julie’s Story”