While we’re on the topic of Karmann Ghias, I may as well disclose my history of more VW nerdiness. Back in ’97 I decided to compile some of my then-Ghia obsession into a web site.

The thing is, I was on to other priorities not long after. Although it got a little attention at the time (featured in a British VW magazine I now forget) the site eventually disappeared when the servers died and that was the end of it. 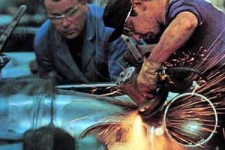 Before we started this trip, we were in the process of purging all of our worldly possessions. In our basement was the dusty old box of computer stuff – including the floppy disc backups of all the HTML and images from the site. Floppys being the junk that they are, most had “read errors” and I could only partially restore the site (why, I still have no idea.)  However, I was able to find some bits and pieces using the Internet WayBack Machine – an ambitious piece of internet archiving, if you ever need it.

Anyway, there it is if you are interested. The Factory Assembly section is neat if you look at nothing else. I really have no intention of doing much else with it other than just leaving it out there. Who knows. Maybe after our bus trip, we can do another one in our ’65 Ghia.

One thought on “The Connection”