I barely even noticed we had arrived at the border – there were none of the usual signs: beggars, street vendors, touts. This has got to be one of the cleanest and civilized border posts we’ve seen.

I drove right past the immigration building and parked behind it in a nice wide lot. There were a few money-changers wandering around, but that was it. We all had to go up to immigration and get stamped out – 1 minute. I walked back up the street and handed my vehicle papers to a guy standing outside the DIAN office and he just waved me off to Ecuador – es todo.

Quick, easy and free. Doesn’t get much better than that. 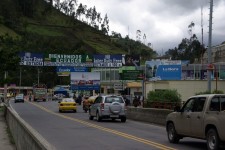 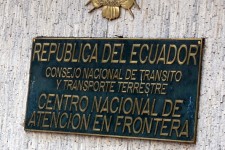 We drive another 100 meters and park again – right in front of the Ecuador immigration. Again we all go in and fill out the tourist cards and get entered into the computer. They actually stick our passports into a dot-matrix printer and print in it. Free again.

The DAN for the vehicle papers is outside the building and to the right, but I miss it a few times because its closed for lunch. After a bit, the guy returns and is happy to help me. I actually manage to have everything I need on me – copies of the passport, license, and title.  He starts typing away, continually making mistakes that I do not correct.

Once he realizes I’m trying to speak Spanish, all he want’s to do is talk. He tells me that most Americans that come through here wonder aloud why he doesn’t speak English – he shares a story about an obnoxious couple from Washington. He wants to know why so many Americas drive gigantic SUVS. He specifically mentions the Ford Expedition in total disbelief… “why?”  He says he’s never seen anyone drive a VW bus through here – he must be new.

It could have all been done in 10 minutes or less, but I’m happy to engage him and I’m amazed that I actually understand most everything he’s saying. Thirty minutes later, I emerge with our vehicle paperwork – ripe with typos – and some answers to a few more questions. We intend to fly back to the states for the holidays as promised (we’ve deprived our parents of their grandchild for too long) and he tells us it’s no problem to leave our car in Ecuador and exit the country. This is a big no-no in other parts of the world. 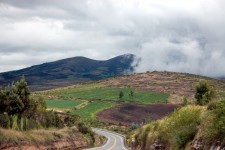 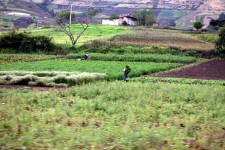 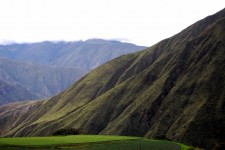 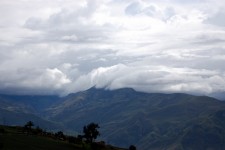 We drive a few more hours through some stunning scenery – somehow different than Colombia – all the way to Lulu’s finca/hostel outside of Otavalo. It’s a cozy place with big dogs and fireplaces. It kind of feels like an English pub – complete with British accents. 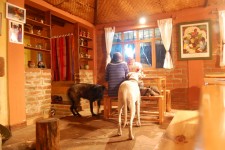 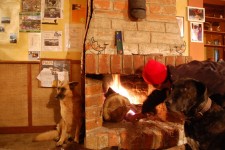 We probably paid over $100 USD in tolls during our drive down Colombia. The toll booths are everywhere on major roads and the roads are in good shape. Apparently, this also entitled us to free towing, repair and ambulance service.

Colombian gas is the most expensive in the north, and cheapest in the south. From about $4.50 USD a gallon to about $2 USD a gallon near the Ecuador border. In Ecuador, it’s $1.45 USD a gallon.

Although we were stopped by police probably twenty times, we were never asked for proof of the mandatory SOAT car insurance. Considering how some folks drive – especially in Bogota – I would still recommend it.

Like anywhere – if you have time – get off the main roads. Colombia rewards you for it.

5 thoughts on “Bienvenidos a Ecuador”