I bet you weren’t expecting that palindrome, were you? 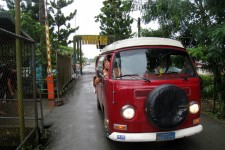 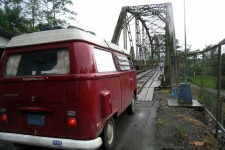 Next up was the border crossing into Panama. I’ve heard this particular border was fairly simple and I wouldn’t have to worry about corruption that plagues other crossings in Latin America. This was correct, but most folks cross the border in the south on the gleaming new Pan-Am highway. We decided to use the only other border crossing there is – in the north near Sixaloa.

It turns out this one is a challenge because of geography. This is a little-used crossing that consists of a train bridge that was originally constructed by the United Fruit Company for transporting banana crops to the ports. Now, the train tracks are closed and planks have  been nailed on either side of the rails. It’s a road.

Like all border areas we’ve seen, the road turns to absolute shit about 10 km from the border and you have to bounce your way up to la frontera. No biggie. Once you get there, it’s the usual scene, but actually fairly quiet as far as borders go. You pull over and park and walk up to the Costa Rica immigration office and fill out some paperwork to exit the country (the same form you filled out to enter) and you get stamped out of Costa Rica. Same goes for the vehicle papers at a desk a few meters away. Other than a few questions about where you’re going and when you’re returning to Costa Rica, it’s pretty painless and costs nothing.

Next is the more difficult part. Crossing the bridge. 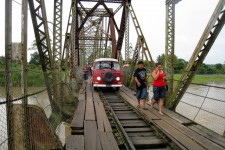 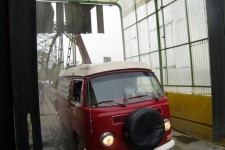 No one – even the local police milling about – actually control the traffic on the bridge. it’s a free-for-all. People are everywhere and there is absolutely no telling if someone is coming the other direction. We asked the police if we could cross and they said yes. We made it maybe 50 meters onto the bridge before we saw a huge banana truck coming right at us. Fortunately, everything moves really slow and the continual stream of pedestrians limit the speed.

Since there’s no way I was going to win a game of chicken with a banana truck, I throw it into reverse and back up – careful not to run anyone over – back off the bridge and wait. And wait. Things move slow.

We try again, but the same thing happens and we back off the bridge again. The bystanders are indifferent. We send Doug out ahead to scout out our chance and he returns with the news of more trucks coming. We wait some more and eventually he gives us the thumbs up to try again. 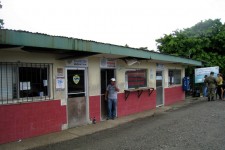 When we get to the other side, there are a few official looking people who want know what we are up to. Oh, and we get fumigated – with the windows down. I’m sure the guy with the switch had a good laugh over that one. I probably won’t get any mosquito bites on my left arm for a week.

I actually have to pay $3 USD for getting sprayed and then another $1 USD each for ‘stickers’ for the passport (Bode didn’t have to pay.) Then we get the actual passport stamps and I forget if we had to pay anything. I had a ‘helper’ guy buzzing around me trying to sell his services for the vehicle permisso and insisted I would be waiting all day without his help. I declined.

I give my title, license, passport and some photocopies to the guy at the vehicle window and he is extremely helpful. He actually gets up and walks me 100 m down to the insurance office (on the left, across the footbridge, and left again at the end of the footbridge.) I think we paid $13 USD for a month of mandatory insurance and went back to the vehicle office where I went inside and the official filled out everything. All I had to do was sign my name.

Easy, but still about and hour and a half for the whole crossing. Oh, and the official currency is the mightly USD, so no more conversions for a while.

The entire time, Angela and Bode waited in the car (we drove down off the train tracks and parked nearby) while local kids pawed all over the bus. 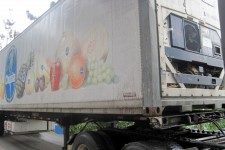 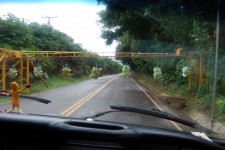 A few miles down the road, we realize something different about Panama. The roads are paved – all of them. We used to be able to navigate by road condition, but here they are all nicely paved… even the side roads. It’s confusing.

Naturally, we get lost and for the first time ever in my life I get stopped by bananas crossing the road. We take this as a bad sign and turn around and eventually some firemen point us in the right direction. We didn’t even have to ask – they took one look at us and pointed us down the road.

4 thoughts on “Yo Banana Boy”