When we have visitors, we try to get them to write a guest post. Here are my mom’s thoughts on the week… 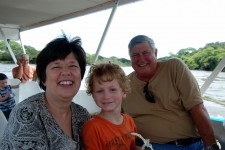 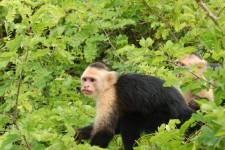 Highlights of our week in Costa Rica…

Arriving at Liberia airport and seeing Angela, Jason and Bode holding a sign that read “Grammy and Granddaddy.”

Eco Tourism. Costa Rico has figured out that preserving the environment attracts tourists which helps the economy which helps provide a stable government.

Green Season, recently renamed from the tourist reducing Rainy Season. Not to worry, the rain is only in the late afternoon or at night and lasts half an hour or so.

Howler Monkeys in the morning.

Jason driving Red Beard, sans power steering, around curves and up a mountain like it was no big deal. Speed bumps are a redundancy when the roads are narrow, dirt, full of pot holes, and choked with bicyclists carrying passengers on the handle bars. His cooking isn’t bad either.

Long, lazy afternoons with my family.

Magpie’s that steal your breakfast.

Noodling with Bode at the swimming pool.

Pedicure and shopping with Angela.

Quiet nights with only the sound of the surf.

Rocky the Raccoon who visited every evening. Make sure the door is closed securely or he’ll get in.

Swimming, snorkeling, snuggling, and sunsets. Bode excels in all but one. Sunsets didn’t mean as much to him as they did to the rest of us.

Unit thirty-three, complete with Shaggy Dog movie, which we watched every night. Our landlords owned one of the five dog actors in the movie.

Volcanic black sand. It might not be as pretty as white sand but it’s easier to see if you washed it all off.

Watching a mama whale and her calf cruise around for our enjoyment every afternoon.

Xanadu (Utopia) : A vacation in Costa Rica with Angela, Jason, and Bode.

Yellow birds building a nest in the palm tree on the patio.

Zerberts by the dozen from Bode. 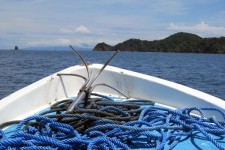 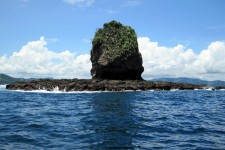 Some random quotes from the week:

Bode: “Grammy , let’s play noodling. You wiggle your fingers and I’ll be the fish.”
Grammy: “Ouch!”
Granddaddy: “Didn’t anyone one else see that coming?”

Jason: “Is it still fishing if you don’t touch the pole?”

Angela: “Bode, Grammy is not a piece of playground equipment.”

Granddaddy: “I think that crocodile’s stuffed and nailed in place.”

Angela: “We’re back. Pour the wine, cue the sunset.”

Bode, on leaving our condo: “Can we stay someplace this pretty again tonight?’
Angela: “Uh, probably not.” 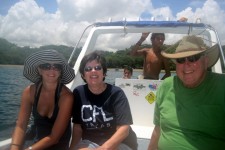 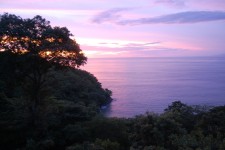