It rained all night in Quepos and was still raining when we woke up late and lounged around the casita. Anna’s house is up a steep hill and her back deck sits at tree level. What you can see at this level is truly amazing. There are all sorts of birds hopping between the trees and iguanas slithering on the rocks below.

The coffee is strong and good and none of us seem to be in any hurry to get to the beach.

Ed had loaned us his iPhone in case we needed anything and it starts to ring. We thought we might need to ask Bode how to answer it, but Bree finally managed. It was our morning Monkey Call. 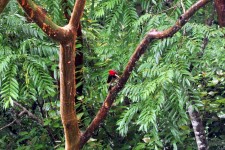 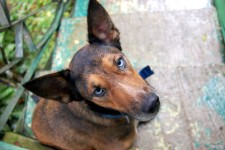 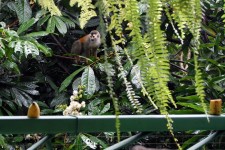 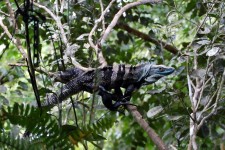 We made our way down to her deck at the main house where they have a Monkey Bridge. It’s basically just ropes between trees to keep them off the electrical wires. The monkeys learn quick and its a monkey highway at certain times of the day.

We all sat on the back deck and watched one monkey stare at us from a tree. After the kids tired of the occasional monkey siting they went back inside to play. We lingered outside talking with Dan and his family. There was a huge blue-headed iguana coming down for some fruit. Ed cut up some bananas and set them out on the railing. Eventually there were monkeys checking us out from every tree. 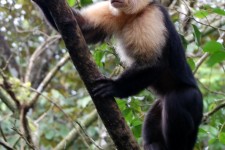 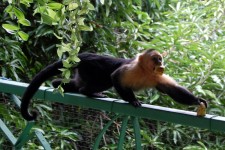 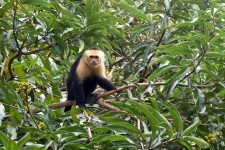 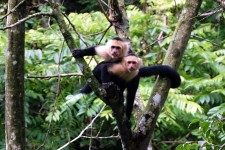 Once the first monkey finally had the courage to go for the banana, it was Grand Monkey Central. Soon there were 30 monkeys clamoring for the banana pieces and they were coming from all over. Some from the rope, others jumping from trees. Some would go on the roof and look at us upside down over the edge. The males would try to grab 2 pieces and we’d stand up to scare them away from the second and get a scary Monkey Shine face. As soon as we would run out of bananas, Ed would provide us with more. Dan’s sisters sat inside, accustomed to the monkeys but amused by our group so excited to see them. 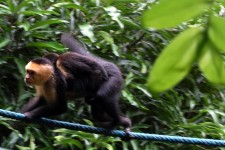 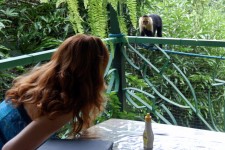 The whole thing was unreal, and definitely another highlight of the trip for me. I am a bit over the top with my love of monkeys, though. Once, I convinced Jason to take a 4 hour round trip train to see a town in Thailand that had been taken over with the primates. Go Monkey!