Our first impression of Honduras was unanimous: GREEN. It’s beautiful and incredibly green.

We crossed late and wanted to make it all the way to Santa Rosa tonight, but it was getting dark and foggy quickly. We climbed up to about 2000 meters on the drive and were pretty much in the clouds. We were going pretty slow and eventually it got dark. We violated one of our major rules – don’t drive at night – but managed to follow a random car to Santa Rosa centro. The ole’ “these strangers must know where they are going” trick fortunately worked for us this time. 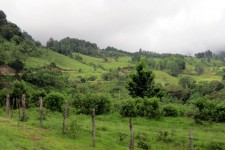 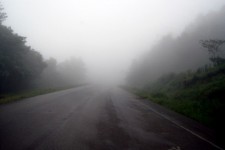 We quickly found a place to stay and walked to the normal town square to find a restaurant and grab a quick dinner. It was pretty bad. Bode made friends with the owner and he was adamant to have a conversation with Bode in Spanish. Bode was hesitant to talk, but we’re pretty sure he understood a fair amount. We’re not sure how to encourage him to chat in Spanish. I certainly didn’t do it in English as a child.

The next day I was up at sunrise for no particular reason and decided to walk around the town while Bode and Angela slept. Nobody was up, except for the folks in the church. I was thrilled to buy a $0.50 cup of coffee an hour later when a cafeteria finally opened. Then, I found a farmer’s market and bought some pastel de leche – milk cake! The Breakfast of Champions. Another lady had fried banana chips that I couldn’t pass up for another $0.50. 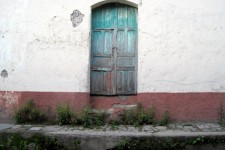 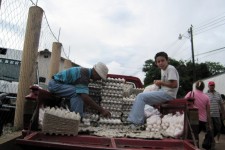 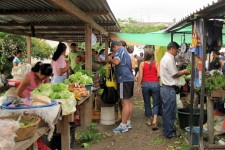 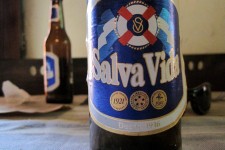 We made the decision to skip the Copan ruins and the adjacent town – we’ve seen enough Mayan ruins to last a good long while. We heard good things about the town of Gracias (a Dios) so we headed there next. There were only a few police checkpoints along the way. All of these guys were pros and didn’t hassle us at all – they just wanted to see the normal paperwork. We even managed to bypass one police checkpoint by pulling into a gasolineria – I’m sure the drug smugglers haven’t figured this one out.

Gracias is a nice little town and was once the capital of all of Central America. It seems like the Spanish moved the capitals around quite a bit. Nice place with cool mountain weather, and a good place for a bike ride. It was Angela’s turn to be sick, so she recuperated while Bode and I wandered the town. Lots of really nice people here. 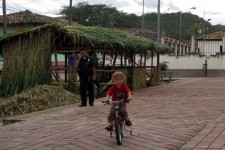 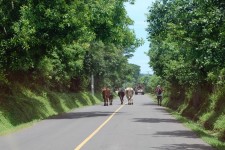 5 thoughts on “Into Honduras”