The three of us were at different stages of  sick, so we thought we’d check out the capital  San Salvador and try to recuperate. The city is very modern, everything is new and there are American chain stores and restaurants everywhere. Our only plan was to hit the children’s museum, Tin Marin, and then to move on to Suchitoto  that afternoon. 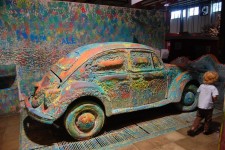 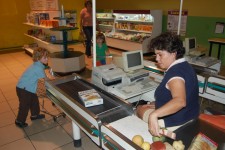 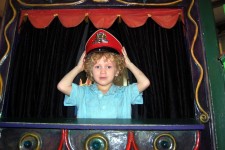 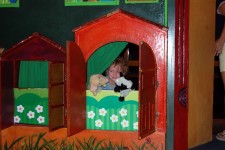 The museum was awesome for younger kids, and one of the best we’ve been to on the trip. They had a VW you could paint, but Bode’s favorite part was the real airplane you could play in. I was enjoying the air conditioning with my seat reclined while the kids ran out of the cockpit and down the aisle yelling that the plane was going down. We must have crashed four or five times. 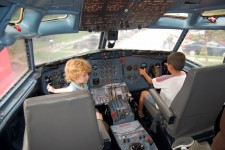 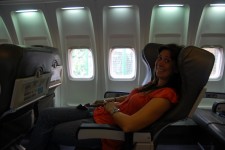 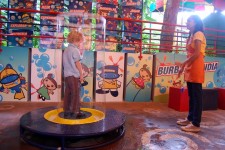 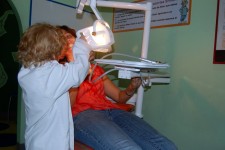 Jason had connected with some of the VW Club El Salvador folks while searching for some brake pads and we got a message that Hermes and Armando would meet us there. Little did we know that aside from helping us out, they would also have the entire day planned out for us.

After the museum, we ate at Armando’s mom’s comidor, a small place with wonderful authentic food. We talked and enjoyed our sopa de gallindo, all while a man in a corner tapped and tapped the paint off the cinder walls with a hammer.

Next, they took us to a club member’s car wash and had Red Beard cleaned and scrubbed. By now, a few other club members had joined us so we were traveling in a VW caravan.

Afterward, they took us to a brake shop where they got us a really good deal on REFURBISHING our breaks. No new parts to be found – this is how they do it here. Pull off the old ones and tack new material on. The brake shoes were so thick in the end, we didn’t think they would be able to get the wheels back on. While we were at it, they recommended turning our drums, so we did that too. Total cost for everything $19. 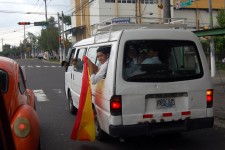 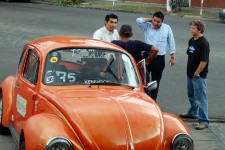 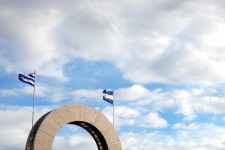 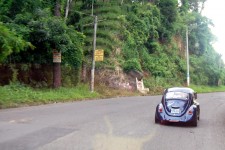 We didn’t really know what was going on next, but we followed them through town again. These guys were really connected and along the way we’d pick up more and more VWs that joined our caravan.

We headed up into the mountains, Red Beard running (and breaking) like a champ. We went so high that by the time we got to the top the clouds and fog obstructed our view. No problem, we were just there to hang out with the VW club and drink some warm atole. 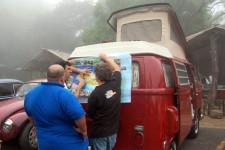 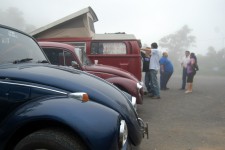 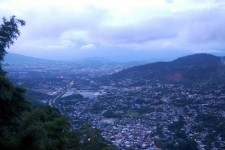 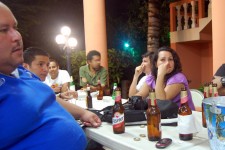 Next up was the club meeting. By now, I think we’d been back and forth across San Salvador several times, always with a bug in front of us and several behind us. We were introduced to the other members and got to enjoy our first tastes of pupusas. We were in heaven.

The club members were really nice and generous, and wanted us to stick around until the weekend so we could all cruise in our VWs to Suchitoto. We really wanted to, but after looking at our map and new time line, we decided we had to get moving. 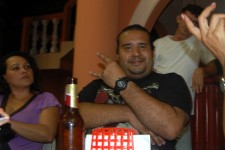 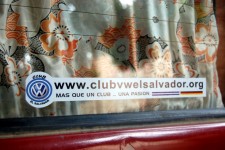 Goodbye and thanks to all our new San Salvador friends. Maybe we can catch up on our way back through!