The route out of Monterrico involved going back the way we came and wasting a few hours  – or – hopping on a ferry to the mainland. It was an easy choice, but we had no idea what we had waiting for us at the ferry dock.

The dock area was flooded, so we were told to go a few streets down and we could load at the end of the road. The guy threw down a few wood planks and without hesitation we drove right on. Our own boat.

And if I had a pony… 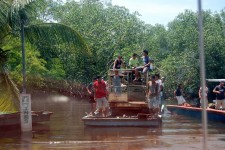 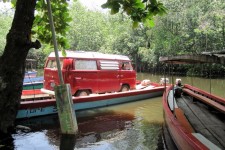 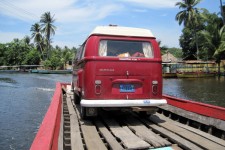 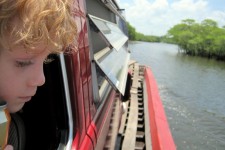 It was a pleasant 30 minute ride through mangroves with lots of birds. A little bit swampy, but still nice. We took photos like we were on a pleasure cruise while our captain steered his tiny outboard motor with his flip-flop. 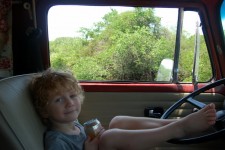 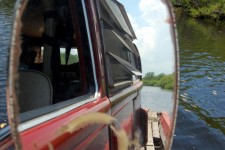 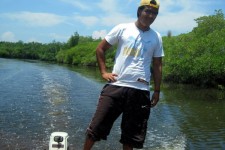 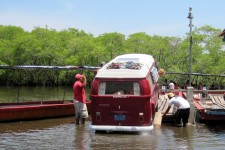 Unloading was the reverse but with some helpers, since this embarcadero was flooded too. This is not a trip for low-clearance vehicles.

In general, people seemed content to swing in their hammocks above the water in their flooded houses. They just move the hammock up higher and wait for the water to go away, I guess.

An hour or so down the road we came upon this mess. 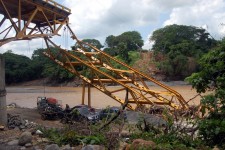 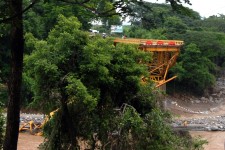 No bridge, no problem. A temporary bridge was in progress – enough that we could drive on a series of wooden planks to the other side.

I thought the good times would never end, but then we came to the frontera and we had to get serious.

This should be easy. In Guatemala there are only two things to do: get the passport exit stamp and cancel the vehicle permit.

It wasn’t easy, because as only this official noticed, Angela’s passport was never stamped when we entered the country. Bode and I were clear, but not Angela. In hindsight, I recall that she inspected all three passports first, then put an exit stamp in Bode and my passports… THEN she brought up the issue with Angela’s passport.

It was the typical set up. First put us in a major bind (stamp me and Bode out of the country.) Then, tell us we have to go all the way back to El Ceibo to get the proper entrance stamp for Angela… or pay a fine directly to them.

It was a rookie mistake on my part – I should have double-checked all the passports when we entered the country.

Anyway, we went around and around and I respectfully pleaded for her help and showed my empty pockets to no avail. She had all the power and we had none. After dancing around a bit, she lowered her multa from $50 USD to about $20 USD. There was another guy in the office and he was in on it, so I didn’t really have anywhere else to turn.

I briefly considered driving away on principle and going to another border about an hour away. But, to turn around we would have to officially re-enter Guatemala and play the same game with the guy at the other desk.

I coughed up the twenty bucks, she tossed the passport to the guy at the other desk who stamped Angela into the country and then she stamped her out. After 30 minutes of negotiating, it took $20 USD and 30 seconds of stamping to forgive the mistake. We left Guatemala with the equivalent of $3 USD in our pockets.

I imagine that if this had happened in the US, I would still be trying to get Angela out of custody. 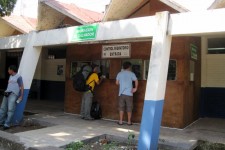 I went back to immigration and asked for their help and my new lady friend actually walked over with me to help straighten it out – at least we made her work a little for that $20. Still, the guy could hardly comprehend that I had no intention of re-entering Guatemala and wanted to cancel my vehicle papers.

Across the border, entering El Salvador was a relative breeze. The officials looked REALLY carefully at all our documents and paused a bit when they saw Angela’s entry and exit stamp from Guatemala on the same day. Still, they couldn’t find any problems (they looked hard,) so they let us in. No stamps here.

The vehicle process took almost an hour for no good reason. They checked the VIN and very slowly filled out the paperwork. Zero cost. A few minutes down the road there was a checkpoint where an official checked our paperwork again and another guy made us pay a road toll. We verified this fee at the immigration office and they said that only US, Canadian, Mexican, and European residents have to pay the road toll.

9 thoughts on “Boats, Bridges and Borders”