After Palenque, we didn’t really have any specific plans. From here, it’s quite a long drive to just about anywhere. We had been considering driving north and around the Yucatan peninsula. However, we really didn’t want to drive north out of principle alone. Besides, we’ve been there several times (FYI – Tulum and Cozumel are great) and were getting anxious to be moving into another country. We also considered driving up to Cancun for the sole purpose of catching a flight to Havana, but this idea just sort of died on the vine. We can still fly there from just about any international airport if we change our mind.

We knew we wanted to get to Guatemala, so had to consider a few routes. Ultimately, we decided on the quickest route to Tikal – through a relatively new road and vehicle crossing at El Ceibo. Word had it that we would have no problems on the Mexico side, but there were essentially no facilities on the Guatemalan side. The worst case would be that we would have to turn around and drive all the way through the southern Yucatan (10 hours?) and then down through Belize. Or, go farther south to the border crossing near the Pacific coast and then make our way back up. We decided to go for it and try to talk our way into the country and figure out the vehicle importation later.

The first thing in the morning, we took the road south from Palenque and then quickly cut east towards the border, then through a mountain road shortcut over to Tenosique and then another turn-off to El Ceibo. Somewhere in there we entered the state of Tabasco.

The roads are all in very good condition – mostly new pavement – and there is essentially no traffic in either direction. We stopped at a mystery town near the border for a quick lunch and the lady gladly over-charged us for a few bowls of chicken soup. We were intentionally trying to spend our few remaining pesos, so it was no big deal. I later worried that the approximately $10 USD worth remaining in my pocket wouldn’t be enough to get us across the border and all the way to Flores. It was.

There’s not much going on at El Ceibo – it’s no town, but a kind of no-man’s land that you might expect to see at a remote border crossing. You have to drive through 10 or 15 guys waving red flags and standing in the road trying to get you to pull over to buy their stuff, exchange money, or eat at their food shack. Show no signs of braking and they’ll move out of the way. When you get all the way to the border there will be a giant Mexican flag and an immaculate new facility on the left. 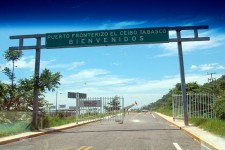 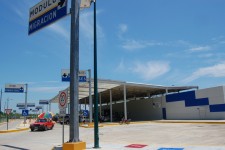 Go inside the large air conditioned (!) building and take your vehicle import papers and the sticker from your windshield to the proper window and wait for the person to fill out and stamp all the paperwork. Everyone here is nice and professional and they only let people with official business into the building – no riff raff. There are signs everywhere indicating that all services are free to discourage touts or “border helpers” from getting established here. So far it’s working.

After that, take your receipt showing proof that your vehicle import papers were canceled, your passports, and your old tourist cards (and Banjercito receipts) to the small office next to the gate. They will stamp everything and send you on your way. There were no lines for anything and the total time required was about 20 minutes. Total cost to leave Mexico: nada.

I stopped and asked some of the wandering money-changers their rate and was surprised that it was exactly the bank rate I verified the previous night. Nobody seems to be exiting Mexico here and their business is selling pesos to Guatemalans, so maybe I was helping them out. I happily exchanged my $10 USD worth of pesos to quetzales and got back in the car.

Some official looking people will lift a gate and let you out of the country. Drive a few hundred meters to Guatemala, where some not-so-official looking people will drop a rope and move a few orange cones to let you into the country. There are a few motorcycle taxis here to ferry people to the Mexico gate and exactly one tiny building on the left. This is the immigration office. Still in the car, we were greeted by the smiling uniformed aduana officer who looked at our plates and said “Ahhhhhh! California! Bienvenidos!” 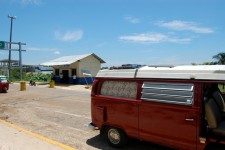 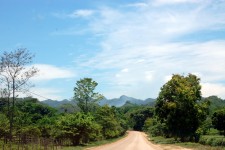 I hopped out of the car and went to the one desk in his small cinder block building to complete an immigration form/tourist permit for all three of us (about $2 USD each) and get passport stamps. Like we suspected, there was no possible way to handle vehicle importation here, but he assured me we would have no problems and we could go to another border to finish our paperwork. This was by far the nicest (and sweatiest) immigration official I’ve ever met. He vigorously welcomed me to his country at least 5 more times and showed me a big map and answered all the questions I was capable of asking. I couldn’t understand all of it, but I think he said we would have no problems in Guatemala, that everywhere was safe, everything was beautiful, all the people were friendly, and they were glad we came for a visit.

I hopped back in the car, exchanged a few moist high-fives with Team Rehm and we were off into Guatemala.

2 thoughts on “Finally! Another Country!”