The next morning we met Ellen, Tony, Francesca and Liberty. They’re a really nice family who was heading north after a loop around Mexico and a little dip into Belize and Guatamala. All the kids were excited to have a new playmate and they spent the entire morning and afternoon sharing toys, books, and playing hide and seek. 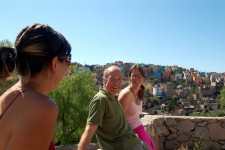 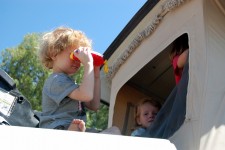 Tony is a diplomat from the UK and they had some pretty interesting stories to tell over the past eight years of traveling. They’ve lived in the Falkland Islands, where the girls grew tired of being chased by emperor penguins. More recently, they lived in (where else) Canada, where everyone grew tired of being cold.

He’s managed to take a year of sabbatical for a brief trip around the Americas and they aren’t’ sure where they will end up next. Hopefully, Italy, but likely back in the U.K.  Argentina is high on the list.

They have a storage space back in the UK – paid for by the government and now 8 years old – where they are hesitant to view the contents of what was once important to them. Imagine creating a time capsule of things your thought important and locking them away for almost a decade. 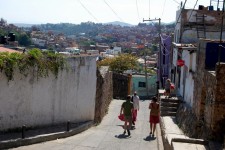 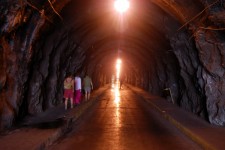 After a few afternoon cervezas (us, not the kids) we all headed down the hill to do some more exploring. They showed us a little bit of a shortcut to town down a long tunnel we would have never entered. It’s a little dark and wet, but it beats walking farther in the glaring sun.

We bummed around town some more and did more of nothing in particular. Tony wanted to take the funicular to the top of a hill for a view of the town, so we tagged along. We somehow missed the funicular and ended up walking all the way.  Again, we were reminded of Italy and enjoyed the rigorous stroll through the narrow alleyways and sidewalks winding their way to the top. 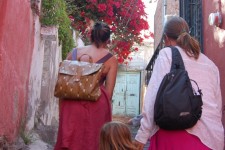 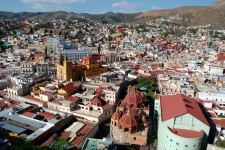 There is a statue of El Pipila (Monumento a La Pipila)  holding his torch high above the town. In September of 1810 he donned a slate shield and torched the walls of the Alhodiga gates (where the Spanish were hiding) allowing Hidalgo’s forces to win the first victory of the independence movement. Things didn’t end up well for Hidalgo or Allende (and presumably for El Pipila) as they were killed about 6 months later and their heads hung for 10 years here in town. Of course, this only incited the locals and kept the memory of the martyrs alive. The skulls are on display in Mexico City…maybe we’ll visit them. 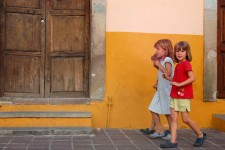 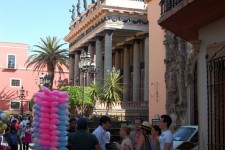 After all this exploring, we were hungry and trekked back to one of the many squares to dine al fresco. I’ve developed a taste for Enchiladas Mineras. It’s a local dish (hearty, for miners) with enchiladas mole, piled high with grilled potatoes and onion over them, then crumbled cheese and creme… then roasted chicken parts on top of that.  Just start from the top and work your way down. It’s awesome. This is my third time to order it in three days.

As best I can figure, this is Mexico’s San Francisco. But, the streets of S.F. have got nothing on Guanajuato. Steeper slopes, cobblestones, underground tunnels, crazier taxis, drunker tourists, more mysterious bars, wackier history, warmer days… warmer nights. Tubas. All good stuff. 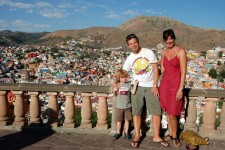 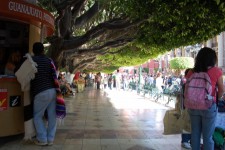 Also, if you just can’t get enough of us, here we are again on another episode of Volks Brothers TV. The first 10 minutes or so is on camper vans and we’ve got a tiny cameo.

One thought on “Diplomatic Relations”