The Baja 200 is not a big deal – most gringos have probably never heard of it – it’s only two years old. Bahia de los Angeles is a tiny little town, so when it’s race time, it’s a big deal.

The night before the race is a big party on the main square. Vendors selling race stuff, parts, and lot’s of showing off and drinking beer. The moto-cross riders were in full regalia, as if the race were starting in minutes. It was a scene. A small one, but still a scene. The teenagers were clutching their cell phones waiting for important texts and such. Smaller kids (and Bode) were jumping in the inflatable jumpy house and all over the playground. Adults were drinking, eating, and bragging. We may have been the only gringos – it was very cool. 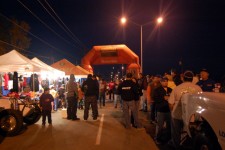 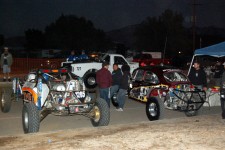 The dirt bikes started at 7 am sharp the next day, so we completely missed it. Everyone else started at 10 am, where I was introduced to the joys of pineapple tamales.

No gringos in the race – except one 65 year old woman who was really a local. She was complaining about how they had merged some of the classes and she would be racing against some of the big boys.  Speaking of the big boys, L.A.’s local boy won the big race last year – The Baja 1000. That’s his red/white/blue truck. 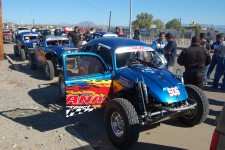 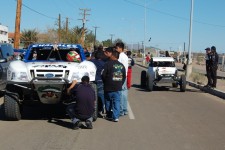 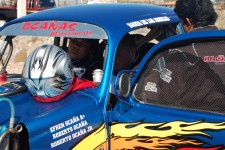 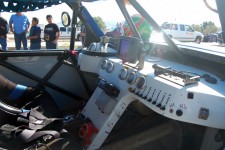 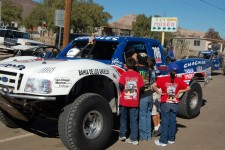 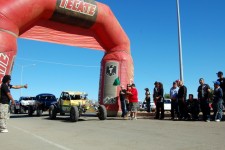 At 10 am everyone fired up their engines and the green flag started waving. There were 30-second staggered starts and about 60 cars, but the order didn’t make much sense to me. I would have thought the faster cars would go first, but it seemed pretty random. It must have made for an interesting race once they all got out in the mountains. 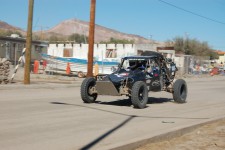 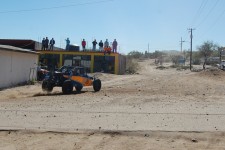 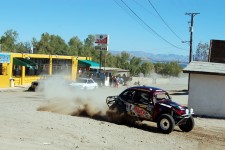 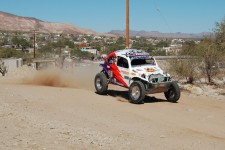 The cars ripped through town and got to skid around a few paved corners before hitting the dirt out near the cemetery. A few of the bigger vehicles were already breathing down the necks of the smaller guys before they were even out of sight. There were clearly some local favorites, who were greeting with honking and cheering from the scattered crowd.  My favorite was a little white bug – almost Herbie-like – but much much sadder. The finish line was somewhere up in the hills, so we didn’t stick around or head up to find it, but I can practically guarantee Herbie didn’t win this time. 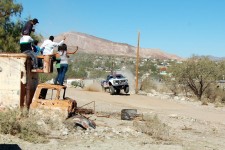 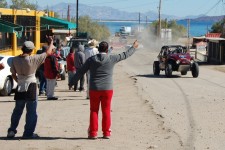