We have read and been warned about the roads in Mexico and now we know first-hand. The road from Ensenada to San Felipe is in poor condition. Maybe it has been the recent rain, maybe just disrepair. Not only are there major potholes (hot tub size in some parts,) but there are areas where the road has just fallen apart or disappeared. Occasionally there is a cone, a few rocks and a hand painted arrow directing you off the highway and onto a dirt road. The dirt road is single-laned, and there is no one directing you or the oncoming traffic. And, it really isn’t a road so much as an area  cleared of cacti so that you can drive through the detour. Still, the potholes on the paved sections are the only places to really watch out.

After a few hours of mostly avoiding potholes (there are so many it is impossible to avoid them all,) the bus developed a new rattle. Jason hopped out once to check it and thought it was just a newly-missing bolt on the front pan. After driving a little further and the noise getting louder, we stopped again only to discover the shock under the driver’s side wheel had rattled completely off. The bolt that was supposed to hold it on was still there, but part of the shock itself blew out. Jason semi-repaired it and put it on backwards so it would hopefully stay put a while. He mentioned something about figuring out how to re-assemble the shock and adding it to The List. Bode and I ate lunch and played games in the bus.

The roadside is littered with all sizes of tires debris, treads and shredded rubber, so we are clearly not the first people with problems on this stretch of road. No whole tires – just remnants of disintegrated tires. Baja road-kill. 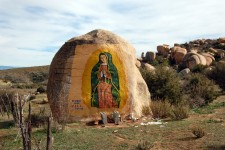 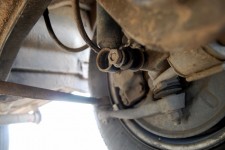 Also, there was some snow on the mountaintops on our drive across the peninsula near Mike’s Sky Ranch. If there’s snow in Mexico, we’ll find it. 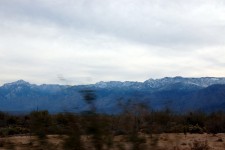 You know it was a good movie when…

We’ve been waived through about 4 military checkpoints, but on our way to San Felipe they said they wanted to do an inspection. Jason and I hopped out and I opened the sliding door to get Bode. Four armed military men waited while I tried to get his attention. Needless to say I was a little flustered when I couldn’t and tried to explain that he couldn’t hear me because of his headphones. Forgetting all Spanish, I resorted to the international headphones sign complete with look of fear on my face. They laughed it off, and then one of the men (and his gun) got into the car and sat down beside Bode to see what was so engrossing. Bode was clueless and continued to be entranced by the movie – even giggling at one point.

A cursory look around the inside of the bus was all it took before they waived us on, reporting to the others that the boy was watching Robots.  They were still laughing as we drove away, making the headphone sign and all.

Later, we asked Bode if he had noticed the four armed men around the car, or the guy sitting next to him in the bus. Nope. I guess he’s so used to stopping for repairs that he didn’t even look up. 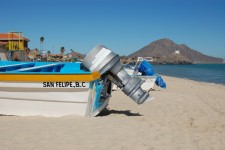 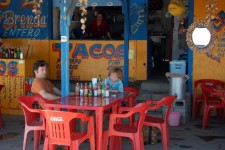 One thought on “Across Baja”