We were having so much fun with the Rambling Three from BBB that we decided to caravan to Joshua Tree. We were a little disheveled from the long weekend and we were flagged down for some final goodbyes before we left the campground so we got separated quickly – before we even left Lake Havasu –  but met up at the visitor’s center at Joshua Tree.

Our first stop was somewhere in the desert with the amazing cacti. We tried to recreate the U2 album cover, but my memory card was full. 775 photos of VW buses from Lake Havasu had to be downloaded. 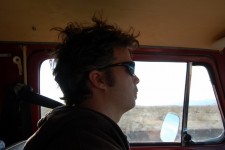 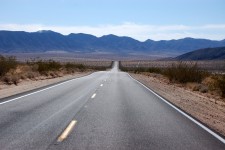 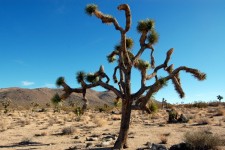 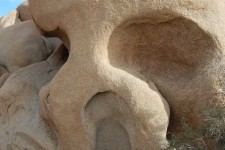 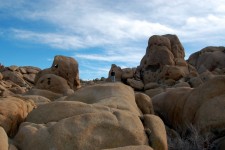 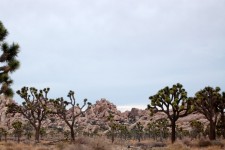 We pulled over at Skull Rock to do some exploration. The kids had a good time getting lost within the giant boulders and trying to find our way back to the vans. 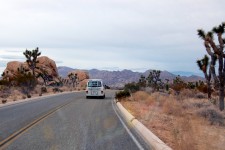 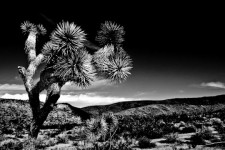 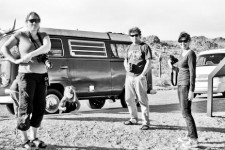 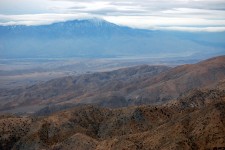 The next day, we headed south and lunched and lingered in Palm Springs. Desert sushi was in order and Bode shoveled it in like an addict. We need to remember to get the kid more sushi. After a bit of lingering, we took the long way to San Diego via the Salton Sea. 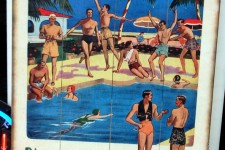 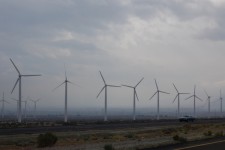 The Salton Sea is a weird place. Not exactly a destination but still interesting to see. It’s actually an inland sea – seagulls and all. It’s saltier than the ocean and when you get out of the car the salt breeze smacks you in the face. The water increases in salinity by 1% each year, so just about every living creature is long gone except for the hearty tilapia. Once the tilapia finally die off, it will probably turn into a festering salty cesspool of algae. Interested in water-front property? 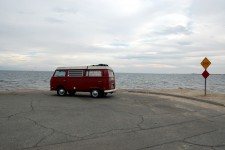 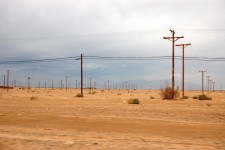 Long ago, developers salivated over building a resort destination like Palm Springs and invested heavily in infrastructure. The problem was that nobody came. The roads are all built and the power lines are all there – just no houses or people. Eerie. the houses that are there are pretty dilapidated, so I suppose this place will just eventually turn back into desert.

The drive through the mountains to San Diego was wet.  Really wet. I think we saw this guy at BBB, and we hope he’s okay.

Ghislain’s friend Jean had volunteered to put us all up near La Jolla, so we were plenty motivated to motor through the storm and we made it there just before dark. 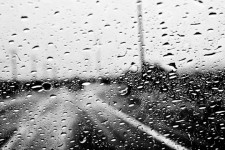 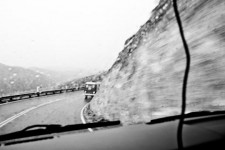 One thought on “Dream Beneath the Desert Sky”