After a few stops for supplies, we headed south towards Yellowstone. There’s not much between Bozeman and the West Yellowstone border, but there is some really nice scenery.  We headed straight for the park and on cue, we happened upon some elk wandering around. One male with 30 females… that’s pressure. On hikes, we felt like experts identifying the independently-movable dual-hooved tracks because of our prior elk education. 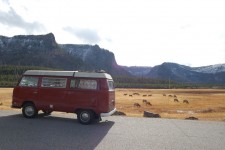 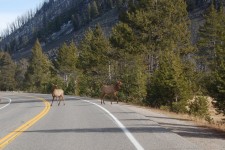 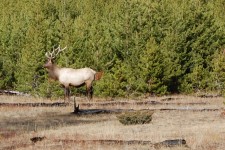 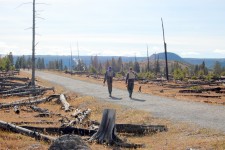 It’s places like this that make me wish I was a fly fisherman…Montana and Wyoming must be the fly-fishing capitals of the world. Since it’s pretty late in the season, the fly fisherman were about the only other folks around. In the distance, you could see guys just quietly casting in the river while a herd of elk grazed around them, steam vents blowing the distance. Kind of other-worldly.

1000 Yellowstone wonders are calling, look up and down and round about you!

Yellowstone was the nation’s first national park. They have more hydrothermal features than anywhere on Earth – geysers, steam vents and bubbling mud pots everywhere. Fun fact – there are 500 geysers in the world and 300 are at Yellowstone. And, a bubbling mud pot sounds exactly like you think it should sound. 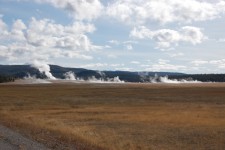 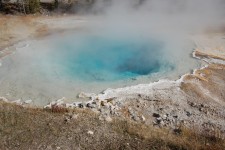 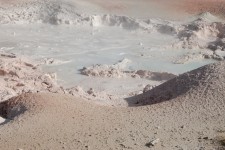 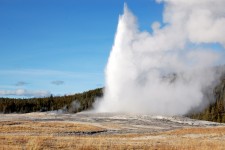 Old Faithful was a required stop and certainly worth seeing. The parking lot and visitor’s center dwarf the actual geyser, but that’s the way it goes, I suppose. There were maybe 30 other people around to see it go when we were there. She was faithful within 4 minutes.  She now blows every 90 minutes or so and the rangers advise visitors on eruption times within 10 minute intervals.

Bode has been itching to use the ‘good’ camera more and more and we’ve now fully handed over the reins. He’s got a unique perspective on things from 3 feet off the ground and many of the past photos have been his. The photo of Angela and I below is probably one of our favorites of the trip. Sure, he cut off our heads, but he insisted it was the only way to get the shot of the geyser he wanted and include us in it. There’s something about it – we just like it. Symbolic maybe. You just never know how things are going to turn out, but it’s usually pretty great. 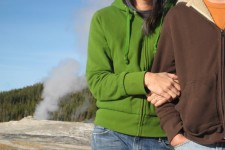 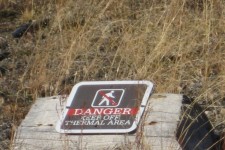 I think we crossed the Continental Divide 4 times on way down to our campsite at the southern tip of the park. It had been snowing and the temperature was dropping. It was interesting to see a distinctive line where the trees were flocked along a thermocline in the distance.

The best part of visiting in October is that there is no one here. Yellowstone – one of the most visited national parks – all to ourselves. Zero people at our campsite. Camping at Yellowstone with no reservations and no neighbors. Cold, but recommended.

After dark, one person rolled into camp. Probably a fisherman who was just sleeping in the truck before an early start the next morning. We could occasionally hear the distinctive creak of an ice chest opening in the distance and that was the only sign of another person all night. We also heard a very loud owl.

The rangers told us that any downed or dead trees were fair game for firewood and I imagined a raging campfire this evening.  It turned out that the ground had been scoured clean over the summer and there wasn’t much other than remnants from other campsites. Not a problem – we still had a nice fire and roasted marshmallows after a chilly chili dinner. 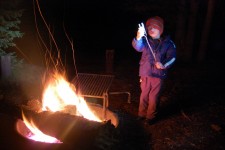 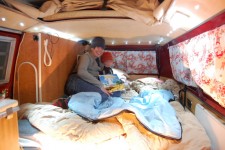