If you drive around in an old Volkswagen you get a lot of recommendations for hippie towns. Nelson is apparently the BC hippie-center, so we headed there. I didn’t find it particularly ‘hippie,’ but I’m coming from Northern California and this was surely one of the more Earthy place we’ve seen in Canada. I think we only saw 3 Vanagons, but we did score some soy yogurt. 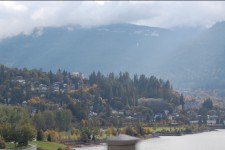 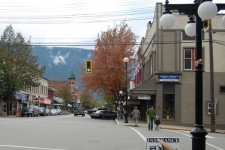 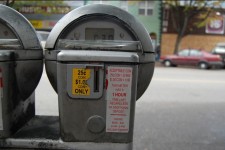 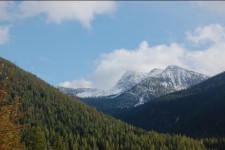 The expense and cold has driven us from Canada (the parking meters are a good deal only if you have Canadian quarters)…so we headed to the Idaho border.  We got the first motel we came across and then set out for the recommended truck stop for dinner.  The next morning we set out for Montana. 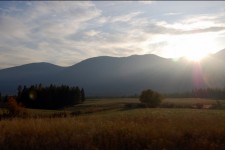 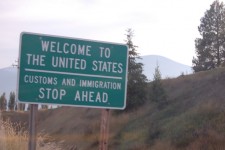 For the past few weeks it has been hard to find kids at the playgrounds. Cold, school, or just winter I’m not sure. Bode isn’t too happy about this, so we’ve caved and started hitting Mickey D’s. Their ‘playplace’ usually has a kid or two for Bode to play with, plus he gets a toy.  I’m not too sure how healthy their apple fries are, but oh well.

He spotted the golden arches in the weird little town of Libby, Montana so we headed in. Oops, no play structure. Oh well, after a few apples and french fries, he buddied up to a couple of kids at the next table and asked them about the nearest playground. It was just across the street. Bode and I headed over while Jason did his daily van tinkering. It was damn cold, so after 20 minutes we started back to the parking lot. Just as we did, the 2 boys and their mother drove up. The boys could ignore the cold, showed off their new toys, ran around the park and burned off some energy.

The mom, Nicole, and I started to talk. She could tell we were from out of town, so I explained our extended trip. She said she had traveled most of her childhood around the country with her mom. They sold stuff at free markets while running from her father who was chasing them. She found out later that he had actually died when she was much younger.  She met her husband about a year ago. He was going door-to-door selling his holiday light hanging services. He annoyed her at first, but eventually they fell in love. He was from California too, but she didn’t know where. My smile and nods encouraged her to keep talking.

She seemed proud when she told me that he’d been in the newspaper and was a wanted man. When he was younger he stole cars.  Once he wrecked her car and it was really hard for him not to run from the police out of habit… even though it wasn’t his fault.

There’s really no need to stop at kitschy roadside attractions.  We just stop and talk to people and it’s way more entertaining.

Later, it was time climb back in the van and make our destination of Whitefish. We stopped for gas in Kalispell and our one and only credit card was denied. I was sure I paid it, but figured the company had finally noticed all the charges from five states and two countries. I called them from the parking lot and was asked if we’d made a $51 charge to “Dating and Escort Services” that morning. I gave Jason a quick glance, but knew he didn’t really have the time to be dating (and he claims he would have spent way more.) There were a few other preposterous charges, all from that day, so I feel really lucky that the credit card company caught it.

Hopefully, getting the credit new card on the road and settling the charges will prove easy as well. I’m just a little surprised that any company would actually put ‘escort services’ as their business category. Wouldn’t that send up red flags in most households and businesses? Anyway, we suspect it was one of the hotel clerks from the past few nights.  Bound to happen if you keep handing out your credit card, I suppose.

A major headache settled, we finally drove to Whitefish. Our new buddy Parker had invited us over and set us up with a studio on the Whitefish Mountain ski resort. It was off-season, so again we were the only ones there.  The room was fabulous – thanks Parker! 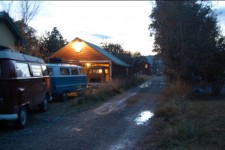 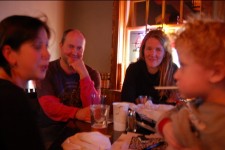 That night we met up with Parker and his friend Kristy, both VW bus owners (he’s got an early ’72 Westy and she’s got a cool blue ’77 transporter). Parker works at the ski resort and Kristy is a 5th grade teacher in neighboring Columbia Falls.  Some years ago, Parker spent some time driving around the US in a VW bus – 62,000 miles worth. He said one day he was on the coast of Maine and wondered how it compared to the Oregon coast.  Three days later he was there staring at the Pacific.  The whole trip kinda went like that…  until he realized he liked Montana enough to stay.  We can relate.

Whitefish is a really cute little town. It’s full with Glacier NP visitors in the summer and ski bums in the winter, but tonight the town was ours. We kept Bode out a little later than usual and indulged in a Friday night out on the town. Parker and Kristy were really fun and we had a really great time sharing stories and talking all evening. We’re feeling pretty lucky to keep meeting such great people!

3 thoughts on “Nelson to Whitefish”