From Trinidad, we headed up to Crescent City, which we were told was an industrial pit. It was no resort, but certainly not a pit. We found a great playground and park next to the waterfront where Bode could play (and walk through a tree) and I could work on some bus projects.

First, was yet another tune-up. I had been noticing a loss of power recently  –  and for some reason the timing and carb needed serious adjustment. I’ll double check this in a few days.

Next, was my chance to replace the drag link. After a few failed attempts in the past few days to use a cheap gear puller (it bent) we located a tie-rod separator that did the trick.  It’s looks like  a super-sized grilling tool. I didn’t pack a hammer in the tool bag, so I ended up doing some serious pounding on it with a rock. Primitive, but it worked. There aren’t many occasions when you get to fix something by pounding on it with a rock.

Bode decided to snap a picture of me and the spoils of victory… and then asked me if I got my hat in France. Touché, mon ami. 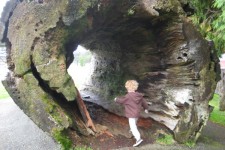 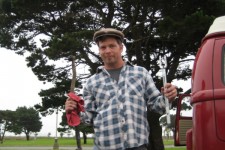 The new drag link means the bus now handles like a Porsche. A crappy one.  But, at least it’s noticeably better.

We cruised along he scenic Smith River and then the Rouge River to our ultimate destination of Ashland. If you haven’t figured it out by now, we’re not exactly following a straight line. We zig. We zag.  I’ve added a new map to our Route page that gives a more precise current location and our actual driving route.

Ashland is yet another college town and yet another really nice place with a walkable and pleasant downtown area. Deer come down from the hills and graze on the manicured front lawns on main street. People are either unfazed by this or are too engrossed in their cell phone conversations to notice (unknown pedestrian in the photo – not me!)

There are restaurants and pubs with umbrellas next to the creek that run through town. You don’t have to go too far to see cowboys and farmland, but it does otherwise seem a little upscale for a college town – I can’t imagine the students are buying high-priced art or doo-dads at the downtown shops. I’m guessing those places make their money during the Oregon Shakespeare Festival that takes over the town once a year. For some reason I just expect college towns to be a little more grungy and full of penniless students.

We didn’t see too many students either.  Oddly, the school here doesn’t start until the end of September and then ends late as well, which seems to cause all sorts of logistical problems for students trying to get jobs. 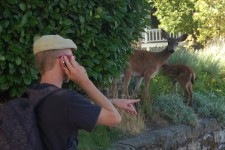 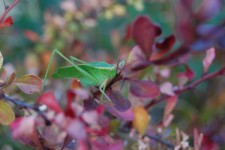 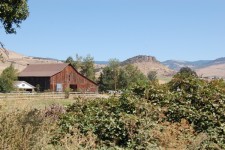 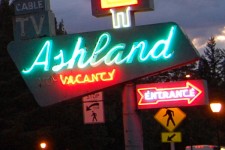 Anyway, we parked here for a few days and relaxed and took care of the normal weekly stuff that we have to do. We were surprised to run into an old friend – BLZ Bug. Angela drove this car every day for maybe 5 years. Bode came along and that was that. It sat in the garage for about four years with only the occasional weekend trip around Alameda before we conceded it was time to sell. We knew the gentleman that bought it was a professor here, but really weren’t thinking about it when we were out for an evening walk around town.  “There it is!”  Angela shouted with certainty as we passed a parking lot. You just know your old bug. We took a closer look and left a note with our card on the window, not really knowing what to do.

I don’t know if you know the rule about selling a car to a friend or family member. Don’t do it. That’s the rule. No matter how great the vehicle or how sweet the deal, at some point in the future there will be a problem. You will hear about it and it will be your fault.  As I was putting the card on the windshield, this is what I was thinking.  Maybe it would be better to not know…  The engine blew up.  The brakes went out.  For all I know, I’m leaving the contact info for the summons on the windshield. 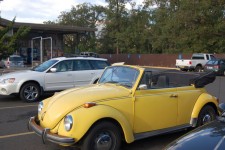 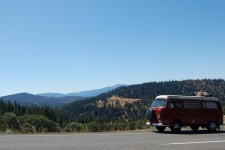 Within hours, the new owner Dan checked-in and wished us well (apparently no catastrophes).  If we would have contacted him earlier we might have had a host for our visit.  And, he and his wife have actually driven to Panama.  Small world.

*this was the official Oregon state motto.  They changed it to ”Oregon. We Love Dreamers.”

— currently headed toward Portland via Bend