Apologies for not posting recently, but we’ve been beyond busy . There are house projects, packing, storing, selling stuff… and the van still isn’t ready. We are also making every effort to see our friends, and that included a very fun party Friday night. We did manage to clean out our liquor cabinet, but ended up with more food than we started with.

Speaking of ending up with more, yesterday was not very productive.  Jason’s new VW buddy, Chris, was kind enough to come over for the ‘final’ tune up. Now the the van is running great. Meanwhile, inside the van Bode was playing with tools and tore several holes in the back seat’s upholstery.

Later, when we occupied him with computer games, he downloaded viruses that took Jason 3 hours to clean up. Needless to say, he was frustrated.  A bit exhausted, Jason laid down (collapsed) to rest for a while and got an unexpected nurse.  In perhaps his first ever significant sign of empathy, Bode sat down next to Jason and began rubbing his back… followed by a big hug.  It worked.

Jason has had to work all week, so things at the home front are moving slowly anyway. Thanks to the help of several of our friends I am still hopeful we will be out of the house when the renters move in on Friday.  No, we will be out.  Whether we get the van ready and sell two cars will determine if we get to leave the Bay Area. 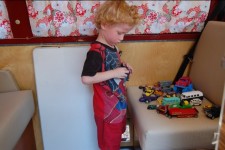 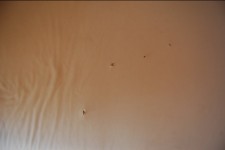 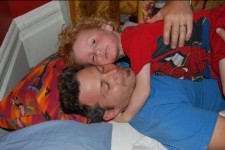 4 thoughts on “One Step Forward, Two Steps Back”