We heard about this small island village off the coast and we set off to find a boat to get to it. Legend has it that the man-made island city of Mexcaltitan, was Aztlan, the ancient home of the Aztecs. The birthplace of the Aztec civilization. This island is also known as the Mexican Venice when it’s streets flood each year.

We traveled several hours and came in from the north. The last 5 miles or so were down a dirt road with big construction trucks in search of the boat launch. After a while we came upon a bunch of wooden boxes across the road. A guy stops us, tells us this is the end of the road and that we can take a boat from here for 70 pesos. Well, that’s about the price we’d heard, but it didn’t feel right to us. There was no boat launch and the guy looked sketchy. Mostly, we were just afraid to leave the bus behind with him. As we pulled out to turn around, a Mexican family jumped out of their very nice SUV and got in the boat. We started to reconsider, but decided that if something happened to the bus we’d feel very dumb not to trust our instincts. Besides, he just put some boxes across the road.

We decide to try to reach Mexcaltitan from the other side. So, we drove south and an hour and a half later we got to Santiago Ixcuintla. This town had a hotel, a beautiful town square and a large market. It was getting late, so this was the perfect stop for the night. 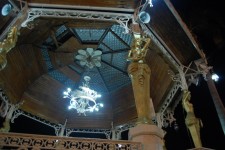 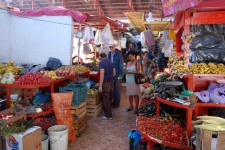 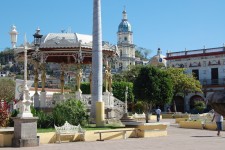 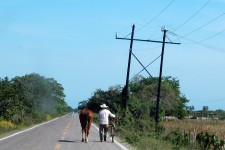 The best thing is that there are no other tourists, so we got to experience a real Mexican town. No one here seems to care about or pander to a gringo walking around. A nice change from the big tourist mecca of Mazatlan.

The square was hopping on this Friday night and there were lots of kids out and about. We stopped by the Mexican market the next morning for some fruit, pastries and a cheap toy to keep Bode entertained for the day.

Then, we tried Mexicaltitan from the south and had much better luck. A paved road, an obvious boat launch, and water taxis.

Shrimp are the big deal here, and they are drying out on the streets as you walk by. Jason got some shrimp tamales for 7 pesos each and chowed down. Inside, they still had the shell on. He said they were good, but a bit weird. Bode and I passed. 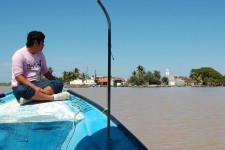 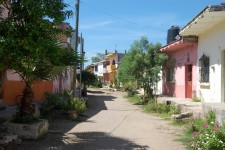 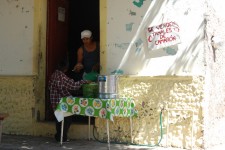 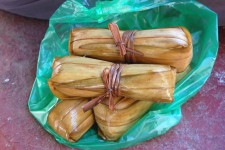 Besides that, there isn’t much to do. It’s a very small town, Jason and I took turns walking around because Bode was having so much fun at the town square. I tossed a football (American) around with a local boy, while another played cars with Bode. 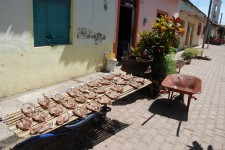 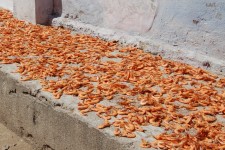 An interesting day of just doing whatever… and it included a boat ride. Nice. We headed back to the mainland and back to our safely parked bus. On to San Blas.

3 thoughts on “Two Attempts at Mexicaltitan”