As we’ve mentioned, Christin and Amanda were amazing hosts to us for nearly a week. While waiting on our engine, Jason helped Christin with one of her many projects: creating an apocalyptic vehicle for Lady Wasteland, a Mad Max style movie to be made soon in Portland. How cool.

I tried to keep Bode occupied, but there was a workshop full of  stuff for him to explore.  We never made it to the zoo, as the OMSI was Bode’s preferred destination. We were members at the Exploratorium, and Bode loved going. The Oregon Museum of Science and Industry is much better suited for a 4 year old. Still hands on, but with bottle rockets, a green screen for recording a weather forecast, and a room full of balls and tubes that shoot Mom. Great stuff for both of us. 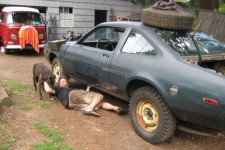 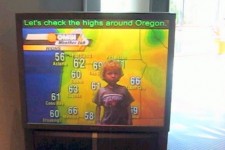 We made it out of Amanda and Christin’s backyard last Saturday afternoon and had the new engine checked out at the new shop. Boy, was it good to be in a running van. The girls had convinced Jason to upgrade to dual carbs, and as Amanda put it “Your bus goes from 5 hippie power, to 30 hippie power”. And it did!

We headed straight to the Alberta Street Fair. Very fun but the best part was seeing Christin’s art gallery. Check out her cool stuff here: http://stilettoindustries.tripod.com/id13.html

But, just barely out of Portland the tachometer stopped working, then the lights. Luckily, it wasn’t dark (yet) and we coasted to a motel in Beaverton. So we actually made it from Gresham to Beaverton. 10-15 miles?

The motel we stayed at was an interesting place. I believe it is circa 1960, complete with full on smoke smell and casino carpeting. Our non-smoking room was in the back building. If nothing else, it was a good chance to catch up on laundry and sleep somewhere other than someone’s backyard.

Bode starting getting a cold – damn you, conveniently located Chuck E Cheese!  So, it was also a good chance for some good ‘ole cartoon watching. Jason took advantage of our new friend Jim’s offer for help and they went off for a new alternator.  This was a part re-used from the old engine,  so we pretty much decided the old engine was a ticking time-bomb. 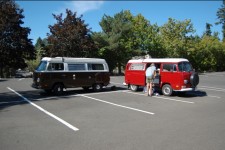 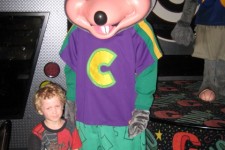 Jim hung around to make sure we got it installed and gave us jump – bus to bus.  We made plans to meet up on the coast later, then headed out for the beach!

2 thoughts on “If It’s Not One Thing, It’s the Alternator”