It was our first evening at the casita and we walked to the beach to catch a phenomenal sunset. We thoroughly lucked out in that there was a turtle sanctuary right across the sand dunes. This was the first night of the turtle release.  I explained that we would like to help, and they told us to come back the next evening. We did, and we kept coming nearly every night. 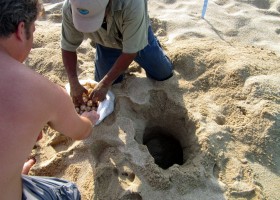 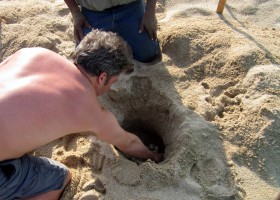 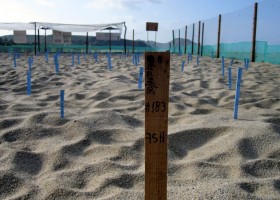 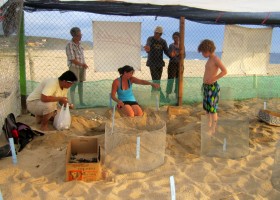 Grupo Tortuguero de Todos Santos A.C. is a family-run labor of love. Enedino (dad) has been collecting eggs and releasing turtles for 15 years. He’s a science teacher, and veterinarian. His son, Dario just got his degree in Marine Biology. 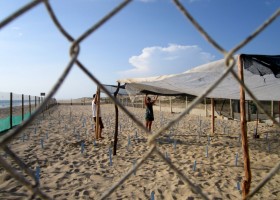 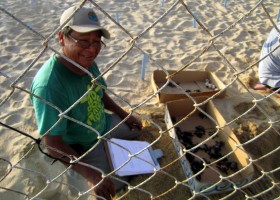 With no regular funding, these guys completely rely on donations. The sanctuary must be moved each year to another location on the beach. The shelter is rudimentary, and a few more posts and shading only goes up when they get a donation.

But, every night from about 2 in the morning til 7 a.m., Endino, Dario or one of a handful of other volunteers search the beaches on a 4-wheeler and bring back the nests. The eggs are carefully counted, buried and information recorded on wooden markers that stick up out of the sand. 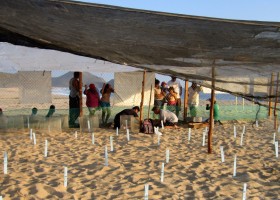 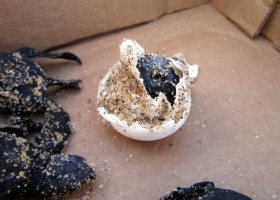 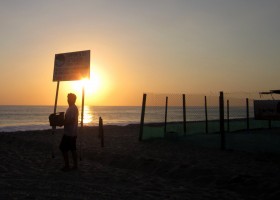 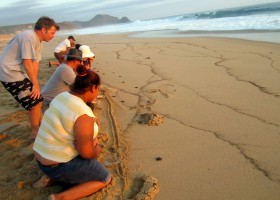 Exactly 45 days later, the eggs hatch. Before sunset, we arrive and dig up the nests, sorting baby turtles into those that have hatched, those that are still hatching, the dead, and the eggs that won’t hatch. Everything is recorded and then the little guys are set free near the ocean. The get tumbled and turned over, and usually pushed back several meters by the big waves before finally making it into the sea and swimming away.  Then, we work on the structure until dark.

Each morning, I go back at 8 and 10 and check for turtles that have surfaced from their nests on their own and release them.

Occasionally, there are some tourists that come to watch and help with the release. I love seeing the joy in their faces as it reminds me of the first night I volunteered. 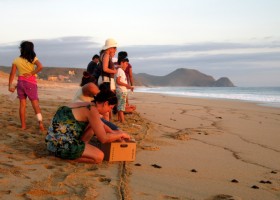 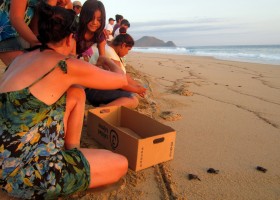 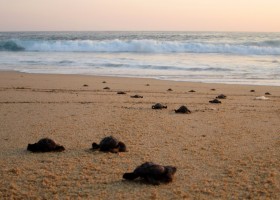 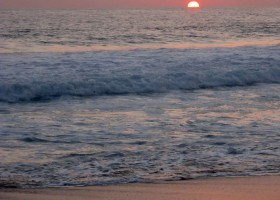 Baby turtles and sunsets on the beach. Not too shabby.