We were only skiing on the mountain for a few hours when Bode got torpedoed. Some yahoo was flying down out of control and pegged Bode on ‘White Out’. A helmet-to-helmet collision that was not pretty. A 200+ lb guy and 50 lb Bode. Guess who got the worst of it?

I saw the whole thing, but it happened so fast there was no way to prevent it. Tears were streaming out from under his goggles and he was dizzy and disoriented. The guy that hit him was apologetic – I wanted to punch him –  but what are you going to do? We probably sat there 30 minutes until he felt well enough to stand up and snow plow down.

This entire season, we’ve only skied on a Saturday one time for this very reason – too many people, and too many of them are out of control and clearly a danger to others. If you’re learning to ski or trying to learn new skills, that’s great – just know your limits and keep your shit together. This is how people end up the in E.R. – go down to the clinic at the base and see for yourself. Lots of collisions.

This marked the end of our day (and season) and Bode just wanted to go home. After an hour of driving, and somewhere near Kremmling… another yahoo. The almost lethal kind.

On the highway, somebody in a large black truck (F-250?) coming the other direction swerved over and crossed the center stripe. Again, I saw it coming but the whole thing lasted a second and nothing could be done. The dude hit us – mirror to mirror! It scraped across the side, then hit again in the back on the vent and even left a tire mark on our rear bumper. We were going 55 mph, and he was going at least that speed in the other direction. A few more inches and BodesWell would have had a slightly ironic ending. 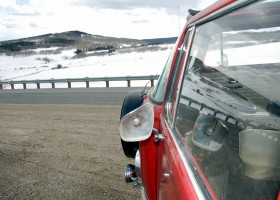 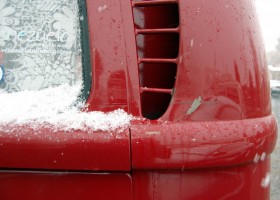 We immediately pulled over and shit a brick as soon as we realized just how close we had come to a major collision. The other guy – he didn’t stop or even slow down. Long gone.

Saturday afternoon in Colorado, USA – the most dangerous day on our entire trip.