Things in Costa Rica were immediately different. A national park flanks both sides of the Pan-American and there is green everywhere…and no trash. There were road signs!

Jason and Doug spent a couple hours in the front seat discussing the differences between Nicaragua and Costa Rica. I started to make a list, as some of the things were pretty funny.

“The livestock is healthier. The horses have all their hair!”

We headed towards Lake Arenal and on the way we spotted a sign for Tex-Mex. We turned the bus around with high hopes of finding some chips and queso and a Lone Star. The Longhorn Bar and Grill wasn’t usually open that day, but they had decided to host “Gringo Night” for another restaurant that was closed. It should have been called “Texan Night” as everyone there except Doug, Bode and the chef were Texans.

There were only about 10 people total, but not a bad showing of Texans in a random town in the middle of Costa Rica.  Most of the gang had either relocated to Costa Rica or were in the midst of relocating. Someone must have brought the fire ants, as we haven’t seen those since Texas either. 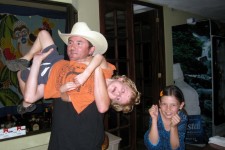 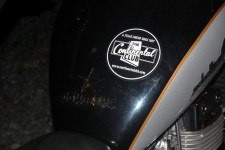 Even though the kitchen was closed, the owner, Jason, agreed to fix us some fajitas.There wasn’t any Lone Star, but we made due with Costa Rican Imperial.

One of the highlights of the night was meeting some great new friends. We met Liz and her daughter Cade, who moved here 2 years ago. Cade is an amazing artist and is already fluent in Spanish. We asked her what the best thing about living in Costa Rica was and she said “School!” She entertained Bode all night.

The night evolved (devolved?) into fun chaos. By the end of the night, there were 10 dogs running around the place, the drunk cook smashed into Liz’s car (she was more bummed about the dogs running off with her flip-flops,) and Bode was hired as a bartender. He would hand someone a beer and say “this one’s on the house.” Nice! 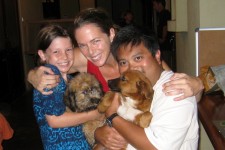 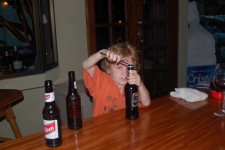 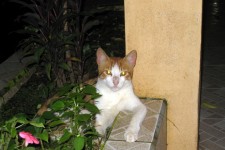 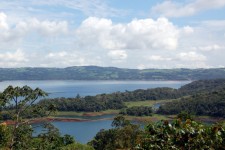 The next day, Cade served as our official tour guide around the lake. She pointed out the local plants and fruits, trees with monkeys, and directed us to the best ice cream place when it began to rain. We also stopped by the enormous El Ceiba pentandra tree, or the Tree of Life, just like the one in Avatar. 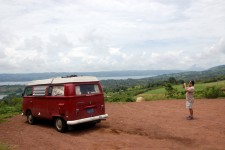 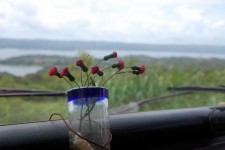 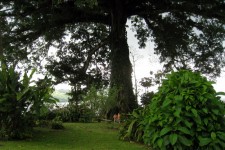 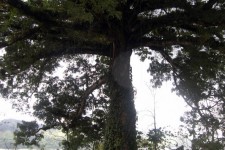 Liz and Cade had invited us to stay at their place and we eagerly accepted. For less than the price of a studio apartment in Oakland, she had a sprawling house with amazing lake views and lots and lots of space. We hung out on her porch and watched parrot flocks fly by, listened to howler monkeys and talked about our years in Austin. Talk about a small world, Liz and Cade had lived directly across the street from Jason’s aunt and uncle. 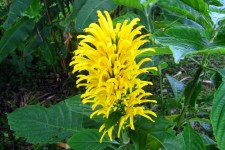 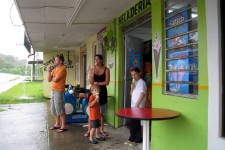