We had been sending occasional emails back and forth to Ane, Andres and Luca since October. We unknowingly met some of their friends while camping with Jim in Oregon and they contacted us through them. We figured we’d connect somewhere down the road.

A few days ago we heard they were close, so we decided to finally meet up at our place over the weekend. It’s a good thing we did.

I sent them some directions and we planned on meeting at the bus. I told them “You can’t miss it – it’s the only bright red bus in GTO.” Amazingly, they found it with no problem. Even more amazing was that they made Bode a vegan cake for his birthday – it was awesome! 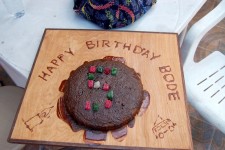 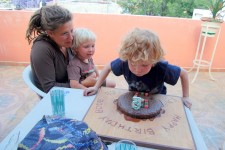 We are always saying that the highlights of the trip aren’t the places we visit but the great people we meet. Once again, this is the case. Ane and Andres are great folks and it took less than 2 minutes for Bode and Luca to become best friends. They were inseparable all weekend.

The kids explored the city and we followed. 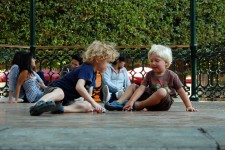 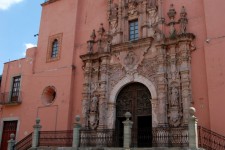 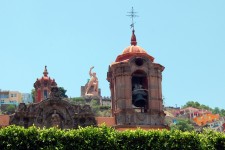 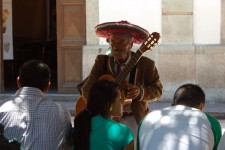 We heard about a star-gazing event outside of town, so later we went looking for the special Noche de las Estrellas bus to take us out to the mountains.

It was all set up for kids. First, there was excellent story-telling (Spanish, of course) from a costumed neanderthal with groovy musical accompaniment. Later, I tried to ignore the presentation on Einstein’s theory of relativity. We need to learn way more Spanish.

We were given star charts and were waiting for it to get completely dark so we could look through the 20 or so telescopes when a cold wind picked up and storm clouds started closing in. This is the danger of astronomy events, I suppose. Within 10 minutes, the sky was covered and it looked like a torrential downpour would begin any minute. The rest of the event was canceled, and the free bus that brought us out there wasn’t coming back any time soon.

Ane made the right call to hike up to the main road and flag down a bus. We finally caught one and made it back to town just in time for the weather to clear up. We sipped cheap wine on the veranda and looked up at a clear starry sky. At least we had some star charts. 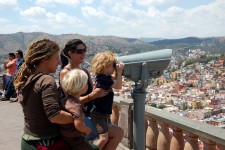 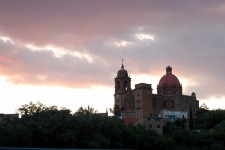 Ane and Andres are interesting folks. She’s a master stone carver and he’s a furniture maker who both decided to take some time off and travel long-term. Luca is learning his third language at age 3. They left from Wisconsin in a ’75 VW Riviera pop-top and headed for the West Coast while we were going the other way.  Not surprisingly, they have had a few mechanical problems along the way 😉

Unfortunately, they have some looming issues bigger than the VW. She’s a dual-US/German citizen but he is not, which is turning out to be a major issue for their trip. We continue to hear stories about complications non-US citizens have with the US immigration system and it truly seems ridiculous. Hopefully, it will all get sorted out soon and we can keep crossing paths as we head south. 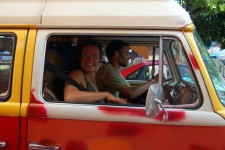 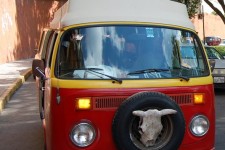 We swapped stories and it seems like we’ve had some pretty similar experiences and have actually met some of the same people.

They met Jim and the Portland VW bus crowd, coincidentally sold a bike rack to our buddy Peter (maybe?) in San Francisco, met some folks in San Diego (?), ran into Fred in Baja – who all told them about the BodesWell family… again and again.  It was a little strange to hear them recount all the people they had met and the times they had been told about us. Apparently, they were even mistaken for us a few times. We kinda feel bad… and weird. Sorry – small world.

4 thoughts on “Birthdays and Bullis”