Things aren’t going as smoothly as hoped on the VW front, so we’ve asked Julie to write our post about Portland.

Hello! Julie here. The aforementioned, very good friend, who had the very good fortune, to visit the very traveling Rehm’s in sunny Portland. You should know that my general day-to-day goal is to get a good story so I can tell a good story … and you don’t always get what you want, but sometimes you do. And boy, did I.

The story ends (for me at least) in a van down by the river, but I should tell the whole story, from start to finish.

I haven’t seen my pals since July and I was missing them a bunch. When Angela called on Weds. 9/9 and mentioned they were near Portland and flexible on timing, I looked for a plane ticket. Four hundred and forty one dollars before fees and taxes – ouch. But it only took me 24 hours to remember my miles! Right on – 25,000 from SFO to Portland on 9/11. Packed my bag, boarded the plane and arrived Friday night at about 9pm, greeted by the smiles and hugs I’ve missed over the past 2 months. And my first ride in the van – who knew it had a name?! We sat around and drank lots of delicious boxed red wine, ate elk salami and caught up on all that we’ve missed recently. Happy.

I’ve never been to Portland and did practically zero research before the trip. I had only 2 things on my list of things to do: Saturday Market and visit the new, cool neighborhood called The Pearl District. Angela had one thing on her list: Voodoo Doughnuts. Needless to say that was our first stop. And success! Not only do they have many of the most delicious and inventive flavors ever, they have an entire menu worth of VEGAN doughnuts!! This allowed us all, even Bode, to enjoy the most delicious and not healthy breakfast together. Sucks when you have to hide good food from the kid who can’t eat it. And if you’ve never had a bacon maple bar – think about Violet’s gum that is a three-course dinner: tomato soup, roast beef and blueberry pie. Then forget the gum and think about a doughnut that is pancakes with syrup and a side of bacon. Is there anything better? And if you tell them it’s your birthday you get a sticker. Or 2 stickers. 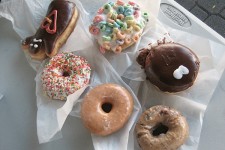 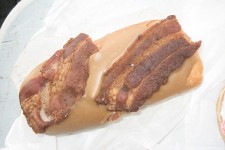 Saturday market was slightly unusual. Lots of wood, creepy clowns, a cute t-shirt with a slice of pizza on it, cats on leashes, tons of homeless people, a guy who would sculpt your face out of clay for $9 in 10 minutes and a great fountain which Bode loved a lot, ice cold water and all. Sadly he wasn’t wearing any undies, so the water absorbing, fleece shorts had to do. A little insight into the Rehms’ world – they have rules about underwear and pants. You can wear your underwear backwards, but not your pants. And undies – not required. 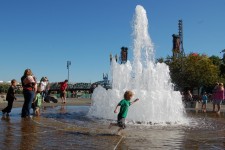 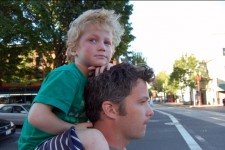 A visit to The Pearl District, lunch and many local Portland beers later, our afternoon ends at the indoor pool at the hotel. Did I mention Bode is the best swimmer in the entire world? Oh wait, that was Bode who mentioned that. He can’t actually swim yet, but he has grand plans, none of which include swim lessons. Yeah, I’m pretty sure he’s not the milkman’s kid.

Dinner at the very spooky pizza place that was a hotel at some point on the past. OK, I may have that completely wrong – but what I do know is that the scary stories we told Bode all day long about people getting Shanghaied at the pizza place did indeed scare him! Poor kid believes in ghosts.

After dinner, Jason insisted Angela and I go the party we had been invited to earlier in the day by some guys in a VW van. They just seem to find each other … So off to the WEND magazine party and the kegs of beer we saw being loaded into that van earlier. On the way over we spot a block party where an odd couple, he in all white/she in all black, was singing rap-ish, pop songs to recorded music. Lots of Portland hipster types – think 20 something guys in slim fitting, mid-thigh length, cut-off shorts (denim, khaki, corduroy.) Now I was taught by my boyfriend in the 90’s that guys weren’t allowed to wear jean shorts which pretty much confirms I’m old, not to mention the disgusting deterioration of my body. But that’s another story. 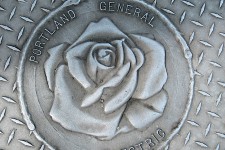 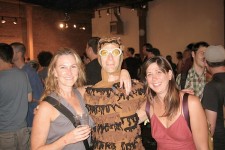 From the block party to the WEND party. A free fund raiser, with free beer, adult bike races on kid-sized bikes (with live helmet-cams broadcast on a big screen), a guy in a chicken outfit and more guys in short shorts. These guys are different than Brooklyn hipsters – more athletic. Bike shoes. But still not good. One good reason to be old, I don’t have to date them. We made it home by 11pm. I think Jason was asleep and Bode was pulling a Scooby Doo all-nighter.

Sunday – the beautiful Columbia River Gorge. Since we were pretty much done with Portland, or at least the 3 things on our very short list, we pile into the van and head out of town. It’s really beautiful. Trees, the river, waterfalls, breweries. Since the Rehms had been to the Full Sail brewery earlier that week, we tried the Big Horse Brew Pub and grabbed a table outside that kinda had view of the river and of the out of control wind and kite surfers – wind was cranking on Sunday. I had the mombo burrito (hint – a bit of foreshadowing of trouble later). Down to the river for a closer look at the action, but it’s getting late and I’ve got to get to the airport for a 7:30pm flight. 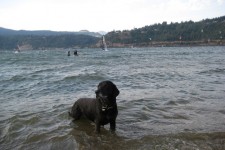 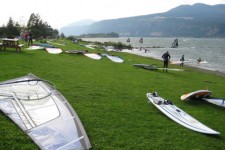 At this point I’m not terribly concerned that the van goes SO SLOW and happy that Jason follows the “Slow Traffic Stays to the Right” rule. I’m a big a fan of this rule. I’m just soaking in the sights and sad that the weekend is coming to an end already. Then the VERY LOUD RATTLE you may have read about in an earlier post. Now, I’m a baker who until 2 weekends ago didn’t know how to pop my hood (it was REALLY hard to see that little handle), but can tell a bad car sound when I hear one and I heard one.

We pull over immediately onto the very narrow shoulder, Jason hops out and checks out the engine. Not good. Angela turns the key – RATTLE. Bad. Jason announces “It’s bad. Very bad. Julie, you’re going to miss your flight”. Now I’m thinking “WOO HOO!!! No work tomorrow!”. I hate working on Mondays. So Angela calls Geico for their awesome roadside service. Unfortunately, they unknowingly opted out of the awesome roadside service. But not to worry, money talks and the tow truck guy listened. And we listened to the tow truck guy tell us all about his one and only real vacation he had with his wife in their 13 years of marriage – they had a great time in the classy part of Cancun.

But before the ride with that guy back to Gresham, a very handsome, very tattooed guy in a VW van (apparently they are a dime a dozen) pulled over to help us. He hops out of his van, completely unaware of the fact that his tiny, extremely nervous Chihuahua also exited the vehicle and RAN RIGHT INTO THE FREEWAY. I had an instant heart attack and just covered my eyes. Thankfully there were no cars or BIG RIGS zooming by at that particular moment, but man, that little doggie’s life flashed before my eyes. But before the near death experience, we waited on the side of the road. It’s pretty scary actually. You can feel the cars passing – lots of whooshing – and you just hope some crazy drunk driver filled with Portland’s best doesn’t veer over into the shoulder, into the van, into the family and their pretty visitor. And it’s even scarier when you have to go to the bathroom. But not to worry, Bode shares another Rehm rule with me – you can go to the bathroom outside if you have to pee, but not if you have to poop. D’oh! Just when you think it couldn’t get worse. I really should not have ordered the mombo burrito. But someone was looking out for me and I made it Gresham without going poop outside or behind the makeshift potty Angela offered to rig up.

Oh boy, are the Rehms crazy? You can be the judge, but I never judge them. I love them but think what they are doing is really hard. But if there’s one thing that’s true in life, the grass is always greener. I thought they had a very lucky life in Alameda – a great home with a great yard in a very fun place to live, a beautiful, smart and mostly healthy child who loves to eat unhealthy food, good looking, funny friends – a great life. But as I mentioned, the grass is always greener. For me, for them. And lucky for them, they are doing what they want, and lucky for me, I get to ride along sometimes. That is, until the van breaks down by the river. 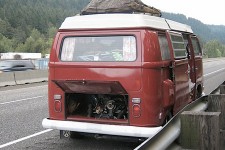 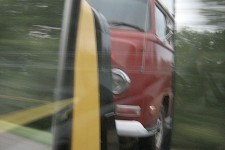 14 thoughts on “Cats on Leashes, and other Portland Stories”